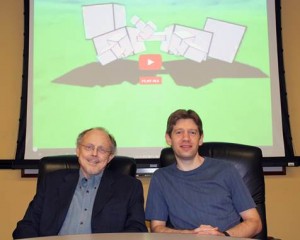 Computer science researcher Dr. Ken Stanley has met his match with donor Dr. Charles “Ed” Bailey, and he couldn’t be more pleased. The pair has found common ground about science. And about life.

The UCF associate professor has built quite a resume in the field of artificial intelligence.

Stanley runs the UCF’s Evolutionary Complexity Research Group, which focuses on abstracting the essential properties of natural evolution that make it possible to discover astronomically complex structures such as the human brain. He creates brain-like programs inside computers that enable robots and vehicles to operate increasingly without the help of humans. And his works have been cited more than 5,000 times by other researchers.

While much of his research centers on building technologies that heighten the usefulness of computers and robots, Stanley’s work has also taken him to scientific places far and wide, what he calls “novelty search” a theory about discovery and innovation. That destination is reached by employing artificial intelligence programs that “show counter-intuitively we can actually solve some problems better by not trying to solve them.”

The research is all about exploration.

About five years ago, by sheer serendipity, that journey led him to Bailey, a staunch advocate and, as it turned out, a strong believer in the principles uncovered by Stanley’s work. The initial result was charitable giving and research funding that continues today. Through his nonprofit organization Global Institute for Scientific Thinking (GIST), Bailey’s most recent gift brings the total to more than $250,000.

In addition, each has fueled the other’s lofty scientific aspirations.

The dollars, says Stanley, are especially important because they come with few mandates.

“To put it simply, the giving brings freedom. What Ed does is encourage the kind of research that would be hard to propose to the typical funding agencies that scientists pursue, because this [research] is open-ended and does not follow tidy milestones laid out from the start” he explains.

“What this [donation] says is that there are no requirements here. Follow your aspirations and intuitions. You can explore really creative ideas, really high-risk ideas, without worrying about not fulfilling a particular checklist.”

“Our research has shown that often if you’re trying to achieve something very ambitious or do something really creative and innovative, or find a solution to a problem that’s never been solved, you’ll have a higher chance of solving it if it’s not your objective” Stanley says. “Sometimes it’s better simply to try to follow the path of novelty rather than follow the path of a specific objective, just to try new things and be creative instead of trying to achieve a specific goal.”

“To put it another way, sometimes you can pursue your passion because it’s interesting to you without actually knowing where it will lead.”

This ‘avant-garde’ exploration resonated with Bailey and has actually become a lifeline.

A medical doctor with a bachelor’s in biology, a practice in psychiatry and clinical research in psychopharmacology for the past 15 years, Bailey was first drawn to UCF as he set out to write a book. Related research began a decade ago, which accelerated when he met Stanley and ultimately led to “Mind Code: How the language we use influences the way we think.”

Biology and evolutionary computation were paired.

The magnitude of the collaboration was intensified by Bailey’s health. Two years ago, he was diagnosed with pancreatic cancer. Although remaining relatively strong and steadfastly thinking ‘outside the box’ he acknowledges that beating the odds is a long-shot. “I’m trying to maximize my treatment; that’s all I can do” he says.

Stanley’s research gives him hope for his health, as well as the future of science.

“We live in a world of possibilities and probabilities” Bailey asserts. “Unfortunately, we tend to think and act and speak like we’re in a world of certainty and that uncertainty is the exception. That’s not the case. … I’m more interested in thinking about other ways to do things instead of this is the way it’s always been done.

Education, learning, creativity and innovation go hand-and-hand with the exploration for information and novelty search. We can take it a step further and consider the difficulties of living in a world of possibilities, probabilities fraught with uncertainties that science strives to help us understand through research.”

“In science, we are overwhelmed with data. A lot of what Dr. Stanley does is deal with these things in abstraction. He compresses the data to where the dimensions aren’t as large. He takes abstract concepts and makes them into something where you can understand things. The better you understand things, the better chance you have of interacting with it in an effective way” Bailey says.

“What’s important to know about science is that science finds useful things but not always by intention, but by searching for information.”

In turn, the two have become close.

“Ed is excited about the novelty part. He’s really optimistic” Stanley says. “Every time I see him he never complains about his personal challenges. He always gets excited about ideas.”

“It’s kind of serendipity that we ran into one another” Bailey notes. “We don’t agree on everything, and that’s fine. That actually makes it better because the more you discuss things, it gives you more things to discuss. If everybody agreed on everything, it might not be as interesting.”

“There are many reasons that the majority of science funding goes into highly specified objectives” he says. “Yet, searching for the sake of searching for information is in and of itself an important challenge for science and an important component of scientific thinking.”

By generating greater interest from other potential donors, he wants to make GIST more financially sustainable. Also, he has named his eventual replacement, Nora Miller, a longtime associate who originally helped him publish an article and now shares his vision.

Miller, a mathematician who has worked in computer technical support, will assume the role of GIST executive director. “My goal is to kind of help him get to the point where he feels he’s made a difference” she says.

“You stumble across some great discoveries. In the meantime, you enjoy your research; the research is exciting” says Bailey, donor and scientific explorer.

“This has probably been the neatest educational opportunity of my life.”