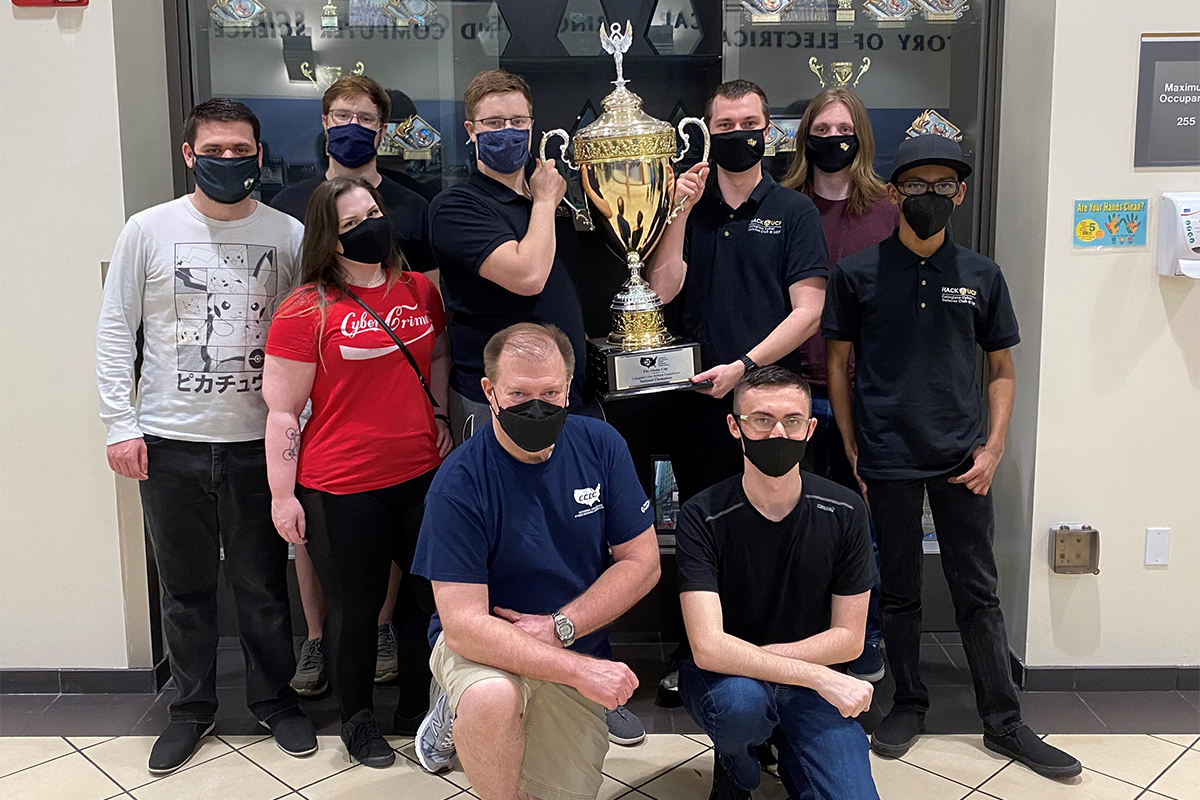 This is the fourth time UCF has taken the top spot. UCF won the national championship in 2014, 2015 and 2016, and finished as runner-up the last three years.

“This year was clearly UCF’s strongest performance in our eight appearances at National CCDC over the past nine years,” says Tom Nedorost, the team’s coach and faculty advisor for the student cybersecurity club, Hack@UCF. “Our team finished the competition with an overall average service uptime of 94.4% which broke our previous record set at this event.”

During this weekend’s two-day competition, UCF’s eight-member team spent more than 16 hours operating and managing the network of a fictitious renewable-energy company. The team used its cyber skills to fend off live attacks from professional hackers who try to extract the company’s propriety information, tamper with websites, steal personal and financial information, and disrupt critical systems. As they defend the company, the teams must also successfully complete a slew of incoming routine business requests, such as updating mail servers, managing e-commerce orders and troubleshooting user issues. Teams begin the competition with an identical set of hardware and software and are scored on the ability to detect and respond to outside threats and respond to business needs.

UCF was leading on the scoreboard at the end of the competition’s first day and the team was determined not to give it up says Michael Roberts ’19, the team captain who placed second in a national cybersecurity competition in November.

“This year, we just went in and did everything we possibly could,” he says. “We didn’t stop working for a single second. Every single task they gave us, we completed. We kept up every single service for the majority of the time. We took it as seriously as we possibly could.”

One of the professional hackers wrote to the UCF team after the event: “You guys were amazing … unusual events you saw got an IR [Incident Response Report event] – even when we thought we had you, you did really smart things … A+ this year from a services perspective.”

The competition is a team sport in which every team member must constantly communicate and rely on each other while simultaneously working on multiple tasks. In previous years, teams physically competed together in a secured room. This year, teams were required to operate remotely while physically separated from one another, adding another layer of communication challenges.

As soon as they found out about the remote requirement, the UCF team began practicing for it, says Roberts. “We would practice two days together and then on the third day we would scrimmage and replicate as much as we could the actual competition, and walk through all of our steps for that. And that we would do online, the same way we’d do during the competition,” he says.

“Our team was very close,” Roberts continues. “We loved competing with each other. We all came in with the same goal. We were all very motivated by winning the trophy and winning first place in this competition. Everyone was willing to put in the time required and during the competition work on whatever was needed, even if it was outside their wheelhouse and maybe not something they were used to doing.”

Modeled after real-world scenarios, the goal of the National Collegiate Cyber Defense competition is to prepare students to strengthen the nation’s network infrastructure. According to the Bureau of Labor Statistics, information-security-analyst jobs are expected to grow 31 percent by 2029, more than seven times faster than the national average job growth of 4 percent.

The competition is watched closely by corporate partners, and competing students are routinely hired as cybersecurity engineers and analysts, penetration testers and security developers.

More than 240 university teams battled for the title through a series of regional competitions held earlier this spring. UCF was one of 10 teams advancing to face off in this weekend’s championship. In this year’s event, DePaul University took second and George Mason University finished third.