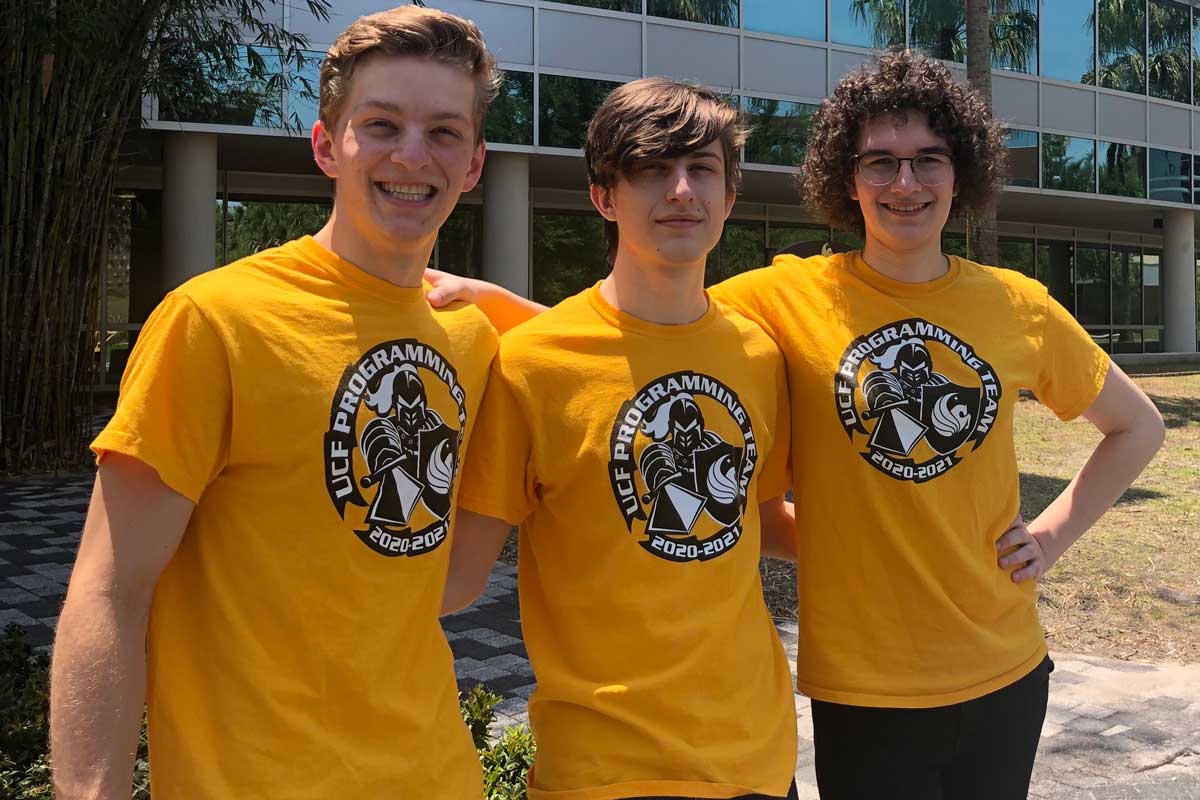 UCF’s Programming Team again proved themselves to be among the best, ousting dozens of universities from the United States and Canada to finish 19th at the North America championship round of the 2021 International Collegiate Programming Contest on Aug.14.

A total of 48 teams competed in this weekend’s championship, which was held virtually. The UCF team beat out teams like Stanford, Harvard, and CalTech, and will advance to the World Finals, where they will square off against the top teams on the planet. A UCF team has qualified for the World Finals every year during the past decade.

UCF’s winning team members included: senior Sharon Barak and sophomore Daniel West, both computer science majors, and junior Seba Villalobos, who is majoring in mathematics and computer engineering. The team members, who all benefitted from the experience of competing in last year’s competition, each carry different strengths. Barak brings years of experience and talent in game theory. West has a knack for solving dynamic programming and string problems. Villalobos excels solving math and graph problems.

“We feel that we didn’t hit our full potential, but what’s important is that we advanced,” says West. “We feel relieved, and we are looking toward the future and giving our best performance at World Finals.”

Prior to qualifying for the World Finals, UCF earned a spot in the North America championship after winning the divisional competition in April. The field began with regional competitions that included more than 3,000 universities and 60,000 students.

The UCF team members practiced on weeknights and multiple Saturdays each month, typically spending 20 hours a week in sessions designed to closely simulate the contests.

During this weekend’s intensive three-and-a-half-hour contest, the UCF team solved six real-world problems. The competition is a battle of logic, strategy and endurance that requires precision, problem-solving and an understanding of advanced algorithms.

For example, team members could be tasked with developing a schedule for landing airplanes and given specifications such as the number of runways coupled with a directive to create a schedule that maximizes the gap between landing times, but ensures as many planes as possible can land safely.

To win, a team must solve the most problems in the fewest attempts in the least cumulative time. Incorrect solutions result in a time penalty. The contest fosters creativity, teamwork and innovation while testing the ability of competitors to perform under pressure.

The team practices in the Eustace-Kwan Family Foundation Computer Programming Lab in the L3Harris Engineering Center. The lab is one of many gifts from Alan Eustace ’79 ’81MS ’84PhD, a UCF computer science alumnus and former senior vice president of Google, who has for more than a decade supported the team in his quest to build a top-tier computer science workforce pipeline from UCF.

The competition and training helps prepare students for the global technology workforce, and all three students are already gaining valuable professional experience while completing their studies. Barak interns at Amazon. Villalobos and West both intern with Facebook.

UCF’s winning team members were supported by a team of six coaches who combined have more than 100 years of experience in competitive programming and a track record of winning, both as participants and as trainers. The coaching team includes Arup Guha, Glenn Martin ’92 ’95MS ’12PhD, and Travis Meade ’12 ’17PhD with the College of Engineering and Computer Science, as well as three industry veterans: Jim Geist ’87, Tom Phan and Chris Gouge who all bring a wealth of professional experience in software and systems engineering at technology companies across the world.

Most of the coaches themselves participated extensively in competitive computer programming as college students. Meade, Gouge and Giest reached the World Finals. Martin, Gouge and Guha have received accolades for coaching winning teams; each has helped 15 previous UCF teams reach World Finals.

Ali Orooji, the team’s faculty advisor, has lent his expertise for more than three decades. The team was first formed in 1982 and Orooji has been the faculty advisor since 1989. A professor emeritus of computer science at UCF, Orooji has continued to volunteer in the role through his retirement.

Martin served as the designated coach for this year’s team and handpicked the three students to serve together. He says what set this team apart was their focus and desire. “Every team wants to do well, but this team in particular really wants to do well,” says Martin. “I encourage them, but I don’t have to. They do it on their own.”

The team’s talent and experience was key to them advancing again in the competition, says Martin. “They are such a strong team and can rely on that strength, and frankly togetherness, that makes them such a great team. It was a team effort from start to finish. I’m really proud of them.”

West is quick to acknowledge how instrumental Martin has been to the team’s success. “He’s the person you would reach out to if you need a little motivation or you need some support or if you need some lunch,” said West during a recent Knights Do That podcast episode. “He’s a good mentor and coach.”

The ICPC is considered the oldest, largest and most prestigious programming competition in the world. The contest — which first began more than four decades ago – has expanded into a global network of universities hosting competitions that advance teams from regional competitions to championships to the ICPC World Finals.

To date, UCF has finished in the top 10 of the ICPC World Finals six times.

UCF Board of Trustees immediate past chair Beverly Seay has long been involved with ICPC and has been instrumental in building new opportunities for computer programming students to strengthen their skills. Seay was recognized at this year’s competition with the ICPC North America Leadership Award for her leadership in organizing the North America Programming Camps and Championships and encouraging the art and science of competitive programming to flourish among universities in the United States and Canada.