Two UCF teams — yes, two teams — fill the trophy cases and rafters with proof of excellence that few institutions around the world can match.
By: UCF News | December 14, 2022

Enter the shiny glass building known as the L3Harris Engineering Center near the center of UCF’s campus. Look up. Dozens of banners hang proudly in the atrium the way they do in sports arenas. Now look more closely. The banners are reminders that UCF is home to two of the most successful high-tech teams in the nation: the prestigious Computer Programming Team and the prestigious Collegiate Cybersecurity Competition (C3) Team. Separate teams. Separate accomplishments. Separate banners. Yet sometimes it’s easy for people outside the glass walls to mistake them for each other.

“It’s like basketball and volleyball teams hanging championship banners in the same gym,” says Glenn Martin ’92 ’95MS ’12PhD, who competed on UCF’s computer programming team as a student before joining the coaching staff in 1994. “We want the cybersecurity team to do well because it elevates all of UCF, and I assume they feel the same way about us.”

The founder of UCF’s C3 team, Associate Instructor of Computer Science Tom Nedorost, credits the computer programming team for the setting a winning tone 40 years ago.

“The success of both teams is the best indication of the quality of our undergraduate computer science and information technology programs. Their team set the precedent,” Nederost says. Then he adds a neighborly jab. “But I hung the first banners. They copied us.” 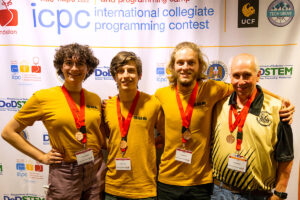 Both teams continued their long streaks of success in 2022. Earlier in the year, two computer programming teams took first and second places among 70 teams at the Southeast Regionals (this marks the 40th straight year that at least one UCF team has finished third or higher at regionals). In November, UCF placed third in the nation and 26th in the world among 137 teams at the International Collegiate Programming Competition (ICPC) in Bangladesh.

While the computer programming team competed overseas at ICPC, two of UCF’s cybersecurity teams were taking the top spots at the Department of Energy’s CyberForce Competition in Illinois. Three days earlier, they’d secured first and third places at the Aviation ISAC Student Cyber Challenge. A week later they won another competition in Idaho. The wins are hard to keep track. 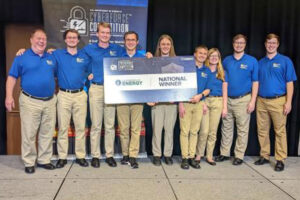 “Schools from around the country know when our team walks into a building,” says Nedorost, before adding a note that applies to the C3 and computer programming teams. “We’ve been so successful for so long that people locally tend to become numb to it. They don’t realize the work that goes into continuing this level of success.”

Computer programming stalwart Seba Villalobos finishes a five-hour practice with the satisfied exhaustion of someone who just finished training for a triathlon.

For starters, they put in five hours every Saturday, all year long — with one exception.

“We took Thanksgiving weekend off,” says Martin, a research associate professor at the UCF-based Institute of Simulation and Training.

Each practice simulates a national or world competition, where teams of three students solve as many real-life problems as they can within the time allotted. They route fire trucks through city streets confused with closed intersections, arrange gate arrivals at a backed-up airport, determine the shortest distances for a series of shipments from various distribution centers.

“The practices prepare them for the mental drain of competition,” Martin says. “They enjoy it enough to put in extra work. If you come to the labs late at night during the week, you’ll find people practicing.”

Everyone from the six-person coaching staff and 27-member team talks about “culture” as the biggest difference-maker. Villalobos is a National Hispanic Scholar who didn’t even like coding until coming to UCF. An Introduction to Computer Programming class sparked a bit of intrigue. Then, while working on an electric longboard in a lab, someone convinced Villalobos to try out for the computer programming team.

“I didn’t quite make the team,” Villalobos says of the tryouts that thinned 100-plus students down to 18 varsity and nine junior varsity competitors. “It drove me to train harder.”

For the next few months, Villalobos practiced more than 40 hours a week. The work paid off when Villalobos was invited to join the JV team before eventually being promoted to varsity.

“I had no idea how talented the other teams were until my first competition,” Villalobos says. “You see these students from MIT, Stanford, Russia and China. It’s a reminder that we can’t slack off. For every moment we aren’t training, other teams are getting better. There’s a saying we use: ‘Hard work beats talent when talent doesn’t work hard.’ ”

To be sure, UCF’s computer programming team has both: a deep pool of talented students who have to work to earn spots on a team that’s won bronze at worlds (in 2018) while traveling to Moscow, Portugal and Beijing. The most important props, though, come from their fellow Knights. During halftime of a football game last fall, UCF President Alexander N. Cartwright introduced the team to the home crowd.

“That was super cool,” Villalobos says, before adding, “but that same week the cybersecurity team got a big congratulations on a road sign for finishing first at a national competition. Their success adds fuel for us to do even better.”

Cybersecurity mastermind Cameron Whitehead first became aware of UCF’s national prestige when he saw a picture of the C3 team on a marquee in Times Square. He was 14 at the time. A year earlier he’d developed his own online video game. By the time he came to UCF at the age of 19, he already had a bachelor’s and two master’s degrees. He’s about to complete a third, in digital forensics. His reasons for coming to UCF had to do with those banners in L3Harris and some problems he encountered with his video game.

“I discovered vulnerabilities in my game that fit with the research I’m doing on securing power grids,” he says.

To dive even deeper into the tactical minds of bad guys, Whitehead and his sister, Caitlin, joined the Collegiate Cyber Defense Club (commonly known as Hack@UCF). Their skills stood out enough for Nedorost to pull them onto the national championship C3 team. Since March 2021, they’ve stood on more than 12 podiums around the country.

“Wherever UCF goes to compete, it seems like we’re the defending champions,” Cameron says.

On Nov. 2, the Whiteheads and Jeffrey DiVincent won the Aviation ISAC Student Challenge in Orlando. The next morning, they drove to Orlando International Airport for an early morning flight to Illinois, where they’d compete in CyberForce.

“When we went through security, I prayed no one would see my search history from the day before when the competition required us to understand and test airport security systems,” Cameron says.

At the event he didn’t want the competitors from 108 schools to witness anything other than another win for UCF.

“We’ve set a high standard, and we use it get better every year,” he says.

When he’s asked about the computer programming team, he says, “They represent UCF, so I’m proud when they do well. They develop the programming, and we find flaws in it. We both make the world better.”