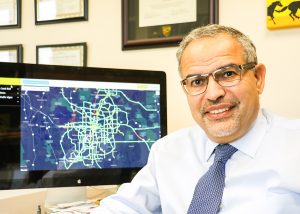 Four University of Central Florida researchers are among the world’s top 25 scholars in their field and more than 100 are in the top 2%, according to a new study ranking career-long scientific impact of researchers from around the globe.

The study, which appeared recently in the journal PLOS Biology, used a composite indicator based on six citation metrics to rank the scientists from a variety of disciplines and subdisciplines.

The UCF researchers in the top 25 of scientists in their field based on a career of research are Abraham Pizam, Mohamed Abdel-Aty, Peter A. Hancock and Demetrios N. Christodoulides.

The full list of 100 UCF researchers who ranked in the top 2% of their field based on citations over their career can be found here.

“I am humbled by this great honor,” Pizam says. “I do my research because of my incessant curiosity and the love of finding something new and undiscovered. To be included with the top researchers in all scientific fields is a great unanticipated honor.”

Abdel-Aty is a Pegasus Professor, trustee chair, and chair of UCF’s Department of Civil, Environmental and Construction Engineering. He ranked No. 17 in the field of logistics and transportation out of more than 21,000 researchers. He is renowned for his work in intelligent transportation systems, traffic-safety analysis and connected vehicles.

“I am very honored and glad that I made this list,” Abdel-Aty says. “It is a result of extremely hard work with my students over the more than 25 years that I have been at UCF. We are now very visible in my field on the national and international levels.”

Hancock is a Pegasus Professor, trustee chair, and Provost Distinguished Research Professor in UCF’s Department of Psychology. He ranked No. 21 in the field of human factors out of more than 13,000 researchers. He is a leader in the study of human-factors psychology and how humans and technology interact.

“It’s very nice recognition and good for the university,” Hancock says. “UCF is on its way up, and we are doing remarkably well. I’m glad to see that human factors appears as a subdiscipline.”

Christodoulides is a Pegasus Professor and Cobb Family Endowed Chair in UCF’s College of Optics and Photonics. He ranked No. 24 in the field of optics out of more than 56,000 researchers. Christodoulides is an expert in research into nonlinear wave propagation, beam synthesis and dynamics, optical thermodynamics, optical solitons, periodic and random optical structures, nonlinear optics in soft matter, quantum transport in arrays and photonic lattices.

“I am truly honored to be included in the list,” Christodoulides says. “Rankings of these sort represent an important metric as to the scientific output of an institution like UCF.”

The 100 UCF researchers in the top 2% of their field are in a variety of fields, including hospitality, applied physics, artificial intelligence, engineering, and optics and photonics.

Three UCF researchers have also been ranked recently as highly cited researchers by analytics company Clarivate, based on data from Web of Science. Abdel-Aty and Christodoulides are in the top 0.1% of citations for their fields, and Madhab Neupane, an associate professor in UCF’s Department of Physics, is ranked in the top 1%.

“I am honored and grateful to be in the list of top 1% highly cited researchers of the world,” Neupane says. “This recognition highlights the global impact of my work at UCF related to the quantum materials research.”

The new list in PLOS Biology is different from Clarivate’s because of the way it arrives at its rankings and the inclusion of subfields of research, according to the study. This addition allows for a comprehensive list of top-cited researchers in a range of fields.

Pizam received his doctorate in business administration from Cornell University. He joined UCF in 1983 to start a hospitality management department, which eventually became the Rosen College of Hospitality Management.

Abdel-Aty received his doctorate in civil engineering from the University of California, Davis, and joined UCF in 1995.

Christodoulides received his doctorate from Johns Hopkins University and joined UCF in 2002.

Hancock received his doctorate in human performance from the University of Illinois, Champaign, and joined UCF in 2001.

Neupane received his doctorate in physics from Boston College and joined UCF in 2016.