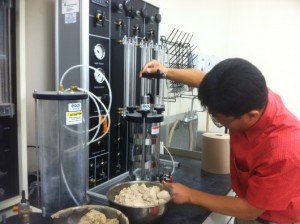 Florida could be called the sinkhole capital of the nation with more than 6,600 identified craters, but predicting where one will form remains a mystery.

Boo Hyun Nam, an assistant professor in the UCF Department of Civil, Environmental and Construction Engineering, has begun working on finding a mechanism that he hopes will give residents that tool.

“Sinkholes have been occurring in Florida for a long time,” Dr. Nam said. “We know how the process works generally, but we do not exactly know what the trigger is so we can anticipate. That is what I want to do, to create a database and a way to reasonably predict.”

Dr. Nam will work with a team of diverse researchers with expertise in geology, soil chemistry, hydrogeology, and geotechnical and environmental engineering because understanding sinkholes involves all these disciplines.

First the team will create a database of currently identified sinkholes from a variety of sources. Then they will analyze the data to look for patterns. Dr. Nam is also interested in figuring out the exact nature of water in sinkhole development. Finally, the team will look toward finding a method for identifying high-probability hazard areas and eventually a mechanism to predict.

“Yes, it is an ambitious project, because it is a big puzzle,” Dr. Nam said. “But the benefits are to provide better information to keep people safe and help potentially reduce costs. It will take time.”

Sinkholes have taken lives and each year cost property owners millions of dollars. In February, a man fell to his death in the town of Seffner near Tampa when a sinkhole swallowed his bedroom as he slept in the middle of the night. His body was never recovered.

Sinkholes are expensive. According to the Florida Office of Insurance Regulation, there was more than $1.4 million in sinkhole claims in the state from 2006-2010. In June, Citizens Property Insurance received approval to increase rates, including a phased-in rate increase for sinkhole coverage. The state-created corporation is a nonprofit insurer of last resort that provides coverage for property owners who can’t obtain insurance elsewhere.

Sinkholes happen when water eats away at the limestone bedrock underground. A chemical reaction causes the rock to dissolve, creating pits or craters. When the sediment layer above the rock can no longer hold its own because its underground limestone support is gone, the ground collapses into the pit creating a hole.

In Florida there are two main types of sinkholes, cover subsidence and cover collapse. Cover-subsidence sinkholes are usually found where thick sediment covers the limestone. As the rock wears away, the sediment fills in the cracks and pits. Eventually the hole begins to form.

The more dangerous sinkholes are called cover collapse, which occur where a cavity develops in underground limestone to such a size that the overlying material can’t support its own weight and caves in. They are unpredictable and are usually triggered by a heavy rainfall.
Dr. Nam holds a Ph.D. in civil engineering from the University of Texas at Austin. Before joining UCF in 2011, he was a postdoctoral research fellow at the Center for Transportation Research at UT. He sits on several professional boards including the National Academy of Sciences Committee on Nanotechnology-Based Concrete Materials Task Force and the National Research Council. Since 2010, Dr. Nam has published more than 20 papers in peer-reviewed journals in the area of engineering. Besides sinkholes, Dr. Nam conducts research in the area of transportation sustainability and pavement systems, municipal solid waste characterization and nanotechnology-based asphalt and concrete materials.