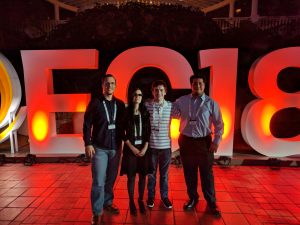 A team of UCF students won a local coding competition by dreaming up and developing an innovative dating app — a process that often takes weeks or months — in less than 24 hours.

If only dating, itself, could be so efficient.

The app, “Ghosted”, leveraged resources from event sponsors VoIP Innovations, Flowroute, Avaya Zang, and Telnyx to mask phone numbers while still allowing people looking for love to communicate with each other via short message services, multimedia message services, and voice messaging services. If at any point the love connection isn’t there, users can “ghost” (leave without explanation) their connections without revealing their personal phone number, eliminating the worry that comes with people not handling rejection well.

“I like the idea of being able to keep a person’s phone number private, while still being able to receive phone calls and messages from others on the Ghosted dating app,” said Horn. “It eliminates the awkwardness of having to tell someone you’re just not that into them.”

The students, who only knew each other through friends of friends before competing together, gained a wealth of relevant experience, especially in the arena of Telecom APIs, or telecommunication application programming interface, used to integrate messaging services into apps.

“There was a good amount of experience gained during this competition as it relates to telecommunication code and technology,” said Camarato. “We have never seen or used this type of programming before, so it was a huge learning curve.”

Each sponsor contributed money to an overall prize pool and awarded money to each of the team who used their technology. The team, who utilized services from all four sponsors, was awarded $1,200 from a pool of $4,000 in prize money. As a result of their win, they also presented their app at the Enterprise Connect Conference 2018, the largest telecom conference in the world, which was held at the Gaylord Palms Orlando the following week.

For now, the team has no plans to advance the app but do plan on working together in future hackathon events.

“We learned to communicate with each other and explain our ideas effectively to increase the progress of our project,” said Camarato. “We definitely see each other remaining friends and communicating with each other throughout the rest of our educational career.”