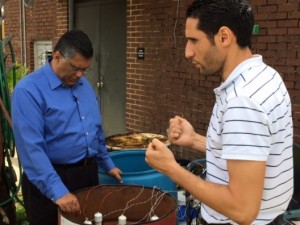 It’s a natural phenomenon that no one can predict – but researchers at the University of Central Florida want to change that.

They are working on developing a way that may help homeowners and planning agencies predict sinkholes and areas prone to them. The research team created a mini-sinkhole simulator to help understand what triggers them.

“We are looking for patterns that may help us predict when a sinkhole will occur,” said Engineering professor Manoj Chopra. “Water plays a very important role in sinkhole formation, and we’re trying to determine if we can find patterns in water levels underground that can help us identify potential sinkholes early.”

Sinkholes occur when soil collapses into large holes caused by flowing water eroding underground layers of rocks. In Florida, the rocky layer is made of limestone, and water can eat away at the stone leaving holes and weakening the rocks’ ability to support the soil above. When the rock wears away, the soil above it can migrate down through the cracks, creating underground cavities. These cavities continue to grow until they can no longer support the weight of the soil above, and anything on the surfaces collapses into the hole.

Mohamed Alrowaimi, one of Chopra’s Ph.D. students, designed the experiment that simulates sinkholes on a smaller scale. It took Alrowaimi more than a year to scale the experiment correctly so that what they learn from creating sinkholes can apply to the real world.

“It was a lot of trial and error, but now it works and we’re getting some interesting results,” Alrowaimi said.

The team used an old oil drum to create the simulation. They cut open the top and filled the drum with layers of sandy soil to replicate the layers that exist in Florida. They inserted PVC piping that contains highly sensitive sensors that monitor water levels, and another set of sensors to monitors soil temperature.

Then they poured measured amounts of water on the soil to simulate rainfall until a sinkhole formed. They ran the experiment over and over and over again, recording data from the sensors. Fellow engineering professor Andrew Yun is providing his expertise in sensors and data interpretation to the project.

Because several agencies already monitor groundwater levels in Florida, Chopra hopes to be able to tap into that data as well. His team also will create a database of current and past sinkholes to compare to the water-level data.

“It’s research in progress,” Chopra said. “But we know there is a connection between water and the sinkhole process. Rainfall affects the levels of water underground in the aquifer so we are examining that too. And temperature may also play a role. Perhaps water levels change or the temperature changes some time before a sinkhole occurs. If we can learn to read those changes, we could have a prediction model.”
The study is Alrowaimi’s doctoral dissertation. Chopra said coming up with a prediction model would be invaluable because it could help in the planning of communities, roadways and other structures by finding areas that are less likely to develop sinkholes. He said the model could also be a good tool for potential homeowners looking for information about whether they should purchase sinkhole insurance.

That’s important because sinkholes can cause a lot of property damage and can also claim lives. One of the largest sinkholes in Florida occurred in Winter Park and was 125 feet deep and 350 feet wide. It destroyed a home, parts of two streets and several vehicles in 1981. Today the sinkhole is a lake. Another sinkhole in Seffner, about 18 miles east of Tampa, opened up in the middle of the night in February 2013 and took the life a man who was sleeping in his bed. His body was never recovered. That hole was 20 feet wide and 20 feet deep.

“It can happen anywhere, anytime,” Chopra said. “That’s a little scary and we want to help prevent tragedies if we can.”

Chopra has multiple degrees including a Ph.D. in civil engineering from the State University of New York at Buffalo. He is the executive director of UCF’s Stormwater Management Academy and a member of the Florida Board of Governors, which oversees the state’s public university system. He has served as a consultant to various engineering firms and has received various honors through the years for his work. Chopra has several patents and his research funding comes from multiple agencies including the Florida Department of Transportation. He has published dozens of articles and books, and is a frequent presenter at conferences. He joined UCF in 1993.