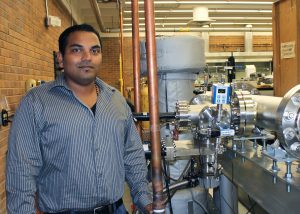 The three-year Defense Advanced Research Projects Agency grant will allow Vasu to develop a device that may look like a cross between a Star Trek phaser and a radar gun used to clock baseballs, based on early sketches. But this device would be used to detect deadly toxins that pose a threat to national security.

The intelligent mobile sensor based on THz spectroscopy will be able to detect fentanyl and Carfentanil, opioids that are 50-10,000 times more potent than heroin. When dispersed in the air, the chemicals can kill, even if the exposure is minimal. The sensor would be able to detect similar toxins, sometimes released in fires or explosions, which pose threats to first responders. These toxins can also be used in chemical warfare. Vasu aims to develop a rugged “handheld device that is computationally robust, energy-efficient, and has the capability for remote detection.” The device would be capable of sensing fentanyl and its analogues in the air and on surfaces even when mixed with other chemical agents in concentrations as low as 0.1 percent, Vasu said. The device would also be able to recognize new fentanyl-related compounds.

“The goal is to combine laser technology with artificial intelligence in a compact and rugged device people in the field can use,” Vasu said. “The goal is to keep our military safe while they keep us safe.”

DARPA’s award program aims to identify and engage rising stars in junior faculty positions in academia as well as equivalent positions at nonprofit research institutions and expose them to national-security challenges and needs, according to the organization.

Those selected were among hundreds that submitted proposals to “enable transformative Department of Defense capabilities.”

Vasu has previously received other awards, including young investigator grants from the Defense Threat Reduction Agency. UCF researchers have received more than $12.5 million from DARPA since 2015.

DARPA began in the 1960s when the federal government invested in breakthrough technologies for national security. Today the agency is comprised of approximately 220 government employees in six technical offices, including nearly 100 program managers, who together oversee about 250 research and development programs. DARPA also works with academic, corporate and governmental partners.