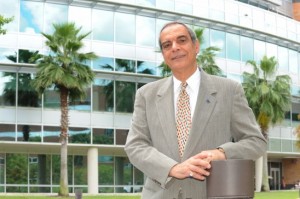 Marwan Simaan’s engineering career has made a difference in the world, from devices that give potential heart transplant patients more time to wait for a donor heart, to sharper images of the earth and all its curves, to games that are smart enough to help teach leadership skills.

That’s why the University of Central Florida engineering professor was named a 2014 Fellow of the National Academy of Inventors (NAI) this month.

“The NAI Fellow status is a high professional distinction accorded to academic inventors who have demonstrated a prolific spirit of innovation in creating or facilitating outstanding inventions that have made a tangible impact on quality of life, economic development, and the welfare of society,” according to the academy.

Simaan, a professor in UCF’s Department of Electrical and Computer Engineering, has spent the past few decades working on projects in a variety of fields including control systems, game theory, signal processing and telecommunications. He’s made significant contributions in each area and has received accolades for his efforts. Recently, he’s been getting attention for a controller he developed for a device called the Left Ventricular Assist Device. It is often used on patients awaiting a heart transplant to assist their heart in pumping blood through the body until a donor heart becomes available. The National Science Foundation project holds great promise and the American Institute for Medical and Biomedical Engineering named Simaan a fellow earlier this year for his work in this area.

Simaan is one of 170 fellows named to the academy this year. The total number of NAI Fellows now stands at 414, representing more than 150 prestigious research universities and governmental and nonprofit research institutions.

Included among all of the NAI Fellows are 61 presidents and senior leadership of research universities and non-profit research institutes, 208 members of the other National Academies (NAS, NAE, IOM), 21 inductees of the National Inventors Hall of Fame, 16 recipients of the U.S. National Medal of Technology and Innovation, 10 recipients of the U.S. National Medal of Science, 21 Nobel Laureates, 11 Lemelson-MIT prize recipients, 112 AAAS Fellows, and 62 IEEE Fellows, among other awards and distinctions.

The NAI Fellows will be inducted Mar. 20 as part of the 4th annual conference of the National Academy of Inventors at the California Institute of Technology in Pasadena. Andrew Faile,  U.S. Patent and Trademark Office deputy commissioner for patent operations, will provide the keynote address for the induction ceremony. Fellows will be presented with a trophy, newly designed medal, and rosette pin in honor of their outstanding accomplishments.

Fellows also will be recognized with a full-page announcement in The Chronicle of Higher Education’s Jan. 16 issue, and in upcoming issues of Inventors Digest and Technology and Innovation.

Simaan joined the University of Central Florida in 2008 as the Florida 21st Century Chair and Distinguished Professor of Electrical Engineering and Computer Science. He served as dean of the college from 2010 to 2012. He has a Ph.D. in electrical engineering from the University of Illinois, Urbana-Champaign. He’s received multiple awards and accolades and published dozens of peer-reviewed articles and books. He is a member of the IEEE and NAE and serves on the American Association for the Advancement of Science.

The National Academy of Inventors is a 501(c)(3) non-profit member organization comprised of U.S. and international universities, and governmental and nonprofit research institutions, with more than 3,000 individual inventor members and Fellows spanning more than 200 institutions, and growing rapidly. It was founded in 2010 to recognize and encourage inventors with patents issued from the U.S. Patent and Trademark Office, enhance the visibility of academic technology and innovation, encourage the disclosure of intellectual property, educate and mentor innovative students, and translate the inventions of its members to benefit society. The NAI edits the multidisciplinary journal, Technology and Innovation, published by Cognizant Communication Corp. www.academyofinventors.org

This story was originally published Dec. 22, 2014, on UCF Today by Zenaida Kotala.