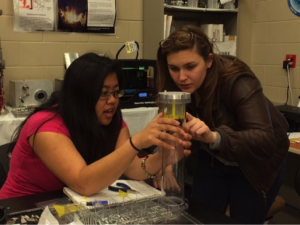 Four CECS undergrads are on a UCF team selected to take an experiment on NASA’s zero-gravity plane. One student has a Silicon Valley job waiting for him.

July 21, 2014 – Never have UCF students been so excited at the possibility of vomiting.

They’ll likely do it all in the name of science beginning Monday, July 21, when five students will board a specially equipped plane that NASA uses to train astronauts and run microgravity experiments. The plane is nicknamed the vomit comet because first-time flyers tend to vomit as the plane hits zero gravity.

“My team and I have worked tirelessly for the past year to get our project up and going,” said student team leader Kelly Lai, an undergraduate aerospace engineering major. “Never in my wildest dreams would I ever think that I would have the opportunity to do this. This is definitely something I will be able to tell my grandchildren.”

The UCF team, led by Physics Professor Joshua Colwell, will be making several flights over three days from Johnson Space Center in Houston.

They will run an experiment developed for NASA’s Undergraduate Student Instrumentation Program. The team proposed the experiment to NASA more than a year ago as a way to get insight into the early stages of planet formation. The project was one of 10 selected late last year. Since then the team has spent hundreds of hours in the lab turning its design into a working prototype.

Sam Benjamin, a junior and the youngest member of the team, said he is both excited and nervous.

“I used to be so confident that I wouldn’t get sick on the flight, but now I really don’t know what to expect,” said Benjamin, who is pursuing degrees in photonics and engineering.

For Brad Hoover, the project marks the end of his academic career at UCF. He graduated, and his first job as an engineer at Lockheed Martin Space Systems Company in Silicon Valley, California, awaits him after the flights.

He credits the hands-on learning at UCF for getting him to California.

“The experience I have gained from working on microgravity projects like this one truly prepared to make an impact in the private space industry,” he said.

Professor Colwell has been on several zero gravity flights before, thanks to NASA grants. The chance to see his students take an experiment and fly it, however, is priceless.

“I’m so excited to see their expressions when they feel weightlessness for the first time,” Colwell said.

“They have worked very hard and grown as a team. It is very satisfying as a professor to see their skills progress and the excitement they have about the research. I can’t wait.”