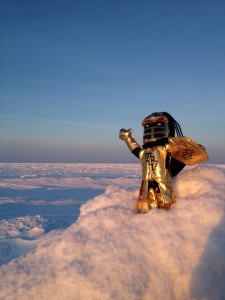 Knightro makes a stop at Hopson Middle School, located at the top of the world in Barrow, Alaska, overlooking the Arctic Ocean.

Knightro has been to the northernmost football field in Alaska and to Hawaii. The squeezable, lovable miniature likeness of UCF’s mascot has also simulated doing a bungee jump and swam with sharks at an aquarium (at least the photos look as much).

On May 16-17, UCF is hosting the Science Olympiad National Tournament for the second time in three years. Expected to draw more than 10,000 students family members, coaches and teachers, it’s the largest team STEM competition in the country and the culmination of more than 280 regional and state tournaments. A total of 120 teams from all 50 states and Japan will consume roughly 95 percent of the campus that weekend.

Knightro was tabbed as tournament ambassador.

To celebrate the 30th anniversary event, the UCF College of Engineering and Computer Science created a sort of pass-the-torch adventure, reminiscent of the torch carrying that precedes Olympics. Ten packages containing the miniature Knightro and a customized banner were sent to 10 starter destinations with specific instructions for students to take photos with Knightro, post them to the Science Olympiad Facebook page then send Knightro on his way. Roughly 90 destinations in 30 states were mapped out based on recommendations from state tournament directors, as teams were still competing for the right to advance to Orlando.

The result: Knightro posed with some of the nation’s brightest middle- and high-school students in unique settings.

Ultimately, the big winner is UCF, according to Terrell Hodges, senior information specialist in the Department of Electrical Engineering & Computer Science, who organized Knightroâ€™s itinerary. â€œThe whole purpose of this was to get the brand out there, the UCF name. Now UCF is in their brain.â€ The hope, she adds, is that some of those outstanding students will choose UCF for college.

The anticipation continues to build, cites Mike McKee, associate director for the undergraduate programs in the UCF College of Optics and Photonics and co-director of the Science Olympiad National Tournament. “After 2012, we heard a lot of good compliments about the job we did” he says. “People were very impressed about how beautiful the campus was, how big it was and the resources that were available. There is a awareness of UCF from 2012.”

Notably, the guest speaker for the Olympiad is Joe Kittinger, a former Air Force fighter pilot who has since become a pioneer in aviation adventure. He and Knightro can no doubt share stories.