From No English to Cambridge University, UCF Engineering Grad Stands Out 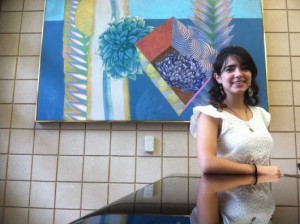 Tatiana Viecco arrived in the United States nine years ago from Colombia, a teen who knew only a few words in English and very little about American culture.

On Thursday she’ll earn her bachelor’s degree in industrial engineering from the University of Central Florida during the 9 a.m. commencement ceremony at the UCF Arena. She is one of the top scholars at UCF, having earned the Order of Pegasus Award, reserved for students who exemplify academic achievement, outstanding university involvement, leadership and community service.

And that’s only the beginning, she promises.

“I am so thankful for all the opportunities this country has given me,” Viecco said. “So many students have many resources and don’t take advantage of them. Not me, I took every opportunity, which has led me here. And this is only the beginning.”

She plans to eventually become a professor in industrial engineering and do research in the area of health care and humanitarian logistics. But before embarking on that path, she said she wants to take advantage of every opportunity to get ready to be the best engineer she can be.

Next stop, Cambridge University in England, where she will earn a master’s in engineering in the area of sustainable development. While adjusting to the United States was a frightening experience for her when she was a teen, Viecco is looking forward to learning and adapting to life in England.

“Moving to the U.S. has been by far the hardest experience I have ever encountered,” Viecco said. “I have been, from a very young age, a very active and involved student both in classes and in extracurricular activities, but not knowing the language created a huge barrier for me . . . It took me a while to get accustomed to the culture and the new way of life, but once I decided to stop being a victim of my parents” decision to move here and instead embrace the opportunity they were giving me and my siblings, it all turned 180 degrees. I’ve learned to take advantage of change and discovered I love learning about new cultures.”

Viecco lived in California three years before moving to Florida in 2007. She credits a high school English as a Second Language teacher for encouraging her. She graduated from high school and enrolled at Seminole State College. She earned her associate degree with honors and transferred to UCF’s Burnett Honors College.

Just recently she learned she was one of 2,000 students nationwide to be awarded the National Science Foundation Graduate Research Fellowship. More than 13,000 students applied for the fellowship. She also just received a Continuing Graduate Fellowship from the Jack Kent Cooke Foundation.

“UCF is such a special place,” she said. “I came because of its industrial engineering program and because of the openness and diversity on campus. The people here are so supportive and there are so many opportunities. You just have to grab them.”

When she wasn’t studying, conducting research or leading a student group, she performed traditional Colombiano folk dancing with UCF’s Colombian Student Association. And in her free time she tries to do as many things as she can on her bucket list. She’s been skydiving and waterfall rappelling and has traveled through Europe by herself.

So where does her relentless determination and inspiration come from?

“Every member of my family inspires me to achieve more than I ever imagine, but as cheesy as this may sound, my hero is my grandpa,” Viecco said. “He came to the U.S. more than 30 years ago speaking no English on Christmas night because tickets are cheaper then. He came here to work. His decision to move to the U.S. was very courageous and even though he did not speak the language his work ethic helped him provide for his family. I want to have his work ethic, dedication, and courage to be able to change the world.”

This article was originally published in UCF Today.