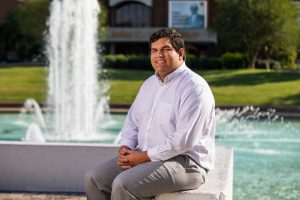 Making modern technology more accessible is the key to unlocking the American dream, says Gustavo Camero, who will graduate during next week’s UCF virtual commencement. Camero plans to dedicate his professional career to closing educational and technological divides across borders.

“I want to build bridges for young people in low-income communities, bridges that will lead them out of their current situations and into prestigious colleges and universities, both in the U.S. and abroad,” says Camero, who will graduate with a Bachelor of Science degree in computer engineering. “Along the way, I want to provide them with technologies that will ensure their success and help them build stronger lives for themselves, their families, and their communities.”

Camero has contributed to endeavors that have received large-scale funding from the National Science Foundation. His research within UCF’s Computer Architecture Lab has twice been published by academic journals of the Institute of Electrical and Electronics Engineers.

Throughout his undergraduate career at UCF, Camero has been engaged in several professional student organizations. He served as vice president for UCF’s student chapter of IEEE, where he developed workshops and was a peer mentor for younger engineering students. Additionally, Camero was a member of UCF’s chapter of the Society for the Advancement of Chicanos/Hispanics and Native Americans in Science.

Following commencement, Camero plans to begin pursuit of a Doctor of Philosophy degree in computer engineering through a Carnegie Institute of Technology Dean’s Fellowship. The fellowship will cover the cost of his tuition throughout graduate school, allowing him to focus on furthering the scope of his research endeavors.

A native of Venezuela, Camero credits his success to educators who have played influential roles in his life, both inside and outside of the classroom. Aspiring to be a tenured professor of computer engineering, Camero hopes to have a similar influence in the lives of young people.

“As a young man, I wasn’t the best of students. A lack of focus and motivation played a hand in that, but more than anything I just didn’t see the value of an education,” said Camero, a first-generation American citizen as well as a first-generation college student, who earned an associate degree from Valencia College prior to coming to UCF. “I was fortunate to have multiple teachers who saw things in me that I didn’t see in myself. They pushed me to be the best version of myself, and I hope to one day have that same impact in the lives of my students.”

When considering colleges and universities, Camero says he was drawn to UCF’s national reputation for innovation and the university’s commitment to educating diverse communities. Annually, UCF graduates one of the highest numbers of minorities in the nation. Nearly half of the more than 8,500 spring 2020 graduate—a UCF record for a spring term—are from underrepresented communities. UCF was formally designated a Hispanic Serving Institution by the U.S. Department of Education last year, and Hispanic students will comprise more than a quarter of this semester’s graduating class.

Enrolling at UCF in 2017, Camero says he was welcomed by a support system and a community of scholars that made his success here possible. He took advantage of numerous resources that UCF offers to help underrepresented students thrive, including the Ronald E. McNair Postbaccalaureate Achievement Program, also known as the McNair Scholars Program.

Named for the African American scientist and astronaut, UCF’s McNair Scholars Program prepares Pell Grant-eligible, first-generation, and traditionally underrepresented students for the rigors of graduate-level study. Michael Aldarondo-Jeffries, program director for the university’s McNair Scholars Program and Academic Advancement Programs, developed a close relationship with Camero during their three years working together. He says Camero stands out as a special student with endless potential for both personal success and societal impact.

“Gustavo stood out from the first time we spoke. He consistently demonstrates an openness towards diverse ideas and beliefs, and I continue to be impressed by his genuine desire to help others,” says Aldarondo-Jeffries, who has served as the program’s director since 2006. “From the beginning, Gustavo understood the effort he put into the McNair Scholars Program would directly impact his results. He was frequently the first scholar in the McNair room in the morning and the last to leave, often late at night. I am excited to see what the future holds for him.”