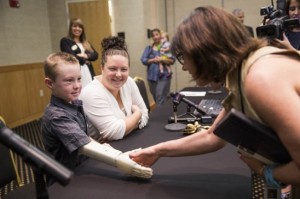 **Note: Scroll to bottom of this article for information on how to get the 3D printing blueprints for the arm.

The thing Alex Pring hated most about kindergarten wasn’t learning to cut, paste or count. It was answering the same question everyone asks when they meet the 6-year-old.

“What happened to your arm?”

Alex is missing his right arm from just above his elbow, and it’s the one thing he doesn’t like talking about.

“I mean, I’m me. So I don’t have an arm,” he said. “I still try real hard to do things like other kids using what I’ve got. But it’s getting harder the more I grow.”

Thanks to University of Central Florida engineering doctoral student Albert Manero, climbing a tree and catching a ball will get a lot easier for Alex. Manero heard about the Groveland boy’s need and pulled together a team of his friends.

In their free time they designed an arm for Alex. It was made on a 3-D printer and runs with off-the-shelf servos and batteries that are activated by the electromyography muscle energy on Alex’s bicep. Unlike adults with missing arms, children’s arms are difficult to make because of the need to miniaturize components. And most insurance companies won’t pay for them because the prosthetics need to be replaced often as the child grows.

Manero, who holds bachelor’s and master’s degrees from UCF in aerospace engineering, and his team designed and manufactured the arm for less than $350. Stratasys, one of the biggest commercial 3-D printer makers in the nation, donated some of the supplies. The team delivered the arm to Alex today.

The team will upload the new designs and how to build the child-size arm and hand to the Internet so anyone with access to a 3-D printer can download the blueprints and give another child with a missing arm a chance to hug with both arms.

“When he hugged me with two hands, he just didn’t let go,” said Alyson Pring, Alex’s mother. “It was amazing. I think this arm will reinforce our ‘you can do anything you set your mind to’ attitude. I think it will help his confidence, so he can see future possibilities and make them seem all the more reachable for him.”

Alex was born with part of his arm missing. The Centers for Disease Control and Prevention estimates about 1,500 babies in the United States are born with deformed or missing arms or hands each year.
Manero, who is pursuing his Ph.D. in mechanical engineering, said he believes the team’s design could help many of these children.

Alyson Pring found Manero through the volunteer online network e-NABLE (http://enablingthefuture.org/about/). The international group of volunteer engineers, 3-D enthusiasts, occupational therapists, students, inventors and professors was started by Rochester Institute of Technology scientist Jon Schull. One of their goals is to help children without hands. Manero joined the group, in part, because he had a friend growing up that had missing fingers, and he hoped he could contribute somehow to helping others.

The organization has six hand designs available to the public online that can be printed on a 3-D printer. It didn’t have any designs for arms without a functioning elbow, however; because the hand’s motion is linked to the elbow bend.

That’s where Mateo Alvarez, a UCF aerospace engineering undergraduate, came up with a key idea. Why not use the energy generated by the muscle movement in the boy’s upper arm to trigger the pull necessary in the arm chamber to open and close the hand?

Manero and the rest of the team – including friends who are majoring in electrical, mechanical and civil engineering, among other fields – spent seven weeks trying out different ideas. In early July, they had a large working prototype. The next challenge was making it small enough and light enough that a 6-year-old could move it easily.

Manero invited Alex and his family to visit the engineering college’s machine shop, where Tim Lindner, the acting manager of the shop, helped the students print the pieces needed to assemble the arm. When the team needed to take final measurements and test its prototype, Alex came back for a second fitting and he learned how to use his muscles to open and close the hand and move the arm.

“He learned pretty fast,” Manero said. “The first thing he did when he could actually control it a little bit was hug his mother. He said it was their first real hug. There wasn’t a dry eye in the room.”

There’s nothing like a firm deadline to motivate a team to finish quickly. Manero, a Fulbright Scholar, leaves for Germany on Aug. 1 to work for the German Aerospace Center. His yearlong research there will be part of his doctoral studies. But he isn’t abandoning Alex or others like him.

“We’ve already heard from another family who needs an arm,” Manero said. “We’re committed to helping who we can and I’ll be working with my team even when in Germany.

“I think 3-D printing is revolutionizing our world in many ways. I believe changing the world of prosthetics is very real. There’s no reason why this approach shouldn’t work on adults too.”

Manero also has established the Limbitless Endowed Scholarship at UCF to support future students with disabilities like Alex’s.

In addition to Manero, the following team members helped to build the arm:

More information
To learn more about this specific 3D printed robotic arm, and to get the blueprints for it, visit the “Limbitless Arm for Alex” web page at http://www.thingiverse.com/thing:408641. To learn more about other 3D printed prosthetics such as hands, visit e-Nabling The Future at http://enablingthefuture.org. You can e-mail an inquiry to info@enablingthefuture.org and the organization will direct inquiries to the appropriate design teams and engineers.