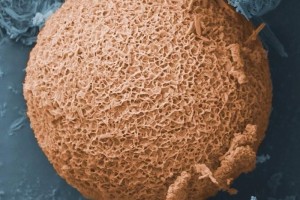 An innovative method to clean up oil spills in the ocean using fly ash treated with advanced materials, developed by CECS Professor Sudipta Seal and fellow researchers, is the focus of an article published by the National Science Foundation. The June 27 article in its entirety is reposted below.

When Sudipta Seal and his co-principal investigator Larry Hench applied for a grant from the National Science Foundation (NSF), their goal was to create a material that could remove large volumes of oil from seawater economically and using a process that would be completely green.

RAPID awards are given to projects that address urgent challenges caused by natural or man-made disasters and similar unanticipated events.

Seal’s and Hench’s grant was one of several that NSF awarded to help with cleanup and environmental protection after the Deepwater Horizon oil spill in the Gulf of Mexico. The foundation made more than 60 awards, totaling nearly $7 million, in geosciences, computer simulation, engineering and other fields.

In the months after the largest oil spill in U.S. history, scientists faced the challenge of how best to clean up the millions of barrels of oil polluting seawater, marshes and beaches. There were questions about the relative safety of the various absorbent materials, as well as their expense and disposal. Furthermore, some of the materials dispersed rather than removed the oil, which led to further challenges.

Power plant waste
Seal, who is the director of the NanoScience Technology Center and Advanced Materials Processing Analysis Center at the University of Central Florida, studies nanostructured materials such as carbon nanotubes, silica aerogels and graphene.

These advanced materials sport very high surface-to-volume ratios, giving them the capacity to absorb huge amounts of oil. However, mass-producing them for sopping up large-scale spills remains prohibitively expensive.

For more than a decade, Seal had been researching the effects of chemically treating fly ash, a dry, gray, powdery waste product captured from power plant flue gases, before they reach industrial smoke stacks. In fact, the name “fly ash” is derived from the words “flue ash.”

Fly ash contains a mix of calcium, silicon and aluminum, along with traces of other elements. Although it can be used to make bricks, concrete and road-building materials, millions of tons of fly ash end up in disposal ponds, mine pits or landfills, where it has the potential to contaminate groundwater.

Oil Optimized Particle Surfaces (OOPS)
In their natural state, fly ash particles do not absorb much oil because they have relatively small surface areas and pore sizes. Plus they contain hydrophilic, or water-loving, compounds that tend to soak up water rather than oil. This means a bulky, soggy mess is created when fly ash is placed in the characteristic oil-water mix resulting from wind and wave action on spilled oil.
Seal and his team had developed a method of treating fly ash to yield a product called OOPS, which stands for “oil optimized particle surfaces.”

Unlike untreated fly ash, OOPS attracts and absorbs the oil out of an oil-water mix. The resulting OOPS-oil mixture “turns into a glop, which floats on the water surface and can be scooped up very easily,” Seal says.

To make things even easier, OOPS can be contained within an oil-permeable mesh bag that can be plucked out of the water once it is replete with oil.

Recycling oil
“But the story doesn’t end there,” Seal says. “Now, the question becomes, â€˜How do we dispose of this oil?'”

And that’s where the “green” comes in.

“Coal plants will be used to make electricity for at least the next two or three generations in this country and they will probably always be used in other countries,” Seal says.

“This means we can put the mesh bag of fly ash charged with oil right back into a coal-fired furnace,” he says. “That way we can get the heating value off the oil and get the fly ash back out on the other end, and it is a primarily green, cyclic process.”

Doing the two-step
With NSF’s RAPID grant, Seal and his team set about refining their method for making OOPS. They use two steps to treat the fly ash. First, they immerse the particles in a heated alkaline bath to make their surfaces more reactive. This also substantially increases the surface area and porosity of the particles.

This step is followed by a second chemical treatment during which tiny “strings” of hydrophobic molecule groups, such as sodium hydroxide, are attracted to and bond with the reactive fly ash surface.

These bonded strings radiate out 1 to 10 micrometers from the surface, like the tiny hairs on a tennis ball. The hydrophobic groups can selectively attract and absorb the long-chain hydrocarbons out of the oil-water mixture, then “store” or capture the hydrocarbons in the many porous surfaces of the treated particles.

Compared to other processes, OOPS is relatively straightforward and efficient: it takes place at low temperatures (around 100 degrees C), and uses very small amounts of chemicals, which can themselves be recycled once the treatment is finished.

Zeolite surprise
As they searched for ways to improve OOPS, the researchers began to realize that their treatment process was actually turning fly ash particles into zeolites–microcrystalline molecules with large surface areas and large pores.

Zeolites, which can be natural or man-made, are prized for many uses. For example, in the oil and gas industry they absorb and filter molecules and catalyze chemical reactions.

“We stumbled upon the fact that the first step in our fly ash treatment was making zeolites with a very high adsorbing characteristic, from a product which would have otherwise gone wasted,” Seal says. “This means our research may have other applications, because normally zeolites are quite expensive.”

“The oil sorption capacity of the zeolitic fly ash was highly improved–up to 500 percent–by chemical modification,” the team reports in a recent article in Environmental Science and Technology.

“Unfortunately, oil spills of all sizes occur annually–it will be great if they can be handled in a safer and more cost-effective manner, while also re-capturing the oil,” said Lynnette Madsen, program director for NSF’s Ceramics Program, which funded the RAPID research grant.

“The fly ash zeolites are a better alternative for widely used synthetic sorbent for oil spill cleanup due to its high oil sorption capacity, and high buoyancy,” the authors state. “This material significantly decreases the cost of oil spill cleanup and remediation of the oil contaminated environment.”

Editor’s Note: This Behind the Sciences article was first provided to LiveScience in partnership with the National Science Foundation.