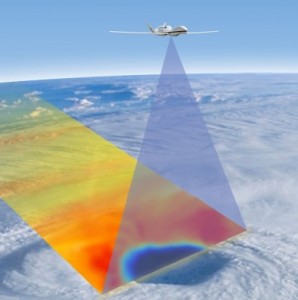 An instrument the size of a kitchen oven aboard a state-of-the-art NASA unmanned aircraft is making the job of hurricane prediction a little easier.

UCF electrical engineering professor W. Linwood Jones had a major role in the development of a microwave remote sensor, which can image the ocean-surface wind speed and rainfall patterns of a hurricane. The instrument, known as the Hurricane Imaging Radiometer (HIRAD), is a joint venture between UCF, NASA’s Marshall Space Flight Center in Huntsville, Ala., University of Michigan and the National Oceanic and Atmospheric Administration’s Hurricane Research Division.

For the past two years, Jones and several of his Ph.D. graduate students have traveled to NASA’s Wallops Island Facility in Virginia during the summer hurricane season to observe the sensors in action during NASA’s Hurricane and Severe Storm Sentinel (HS3) Mission. The mission is to investigate the physics of hurricane formation and intensity change.

HIRAD and other sensors have flown on-board two cutting-edge Department of Defense Global Hawk unmanned aerial vehicles (UAVs) as part of the NASA mission. The planes can travel thousands of miles to monitor a storm for durations up to 30 hours without having to refuel. Using digital-signal-processing technology, the HIRAD can measure the entire hurricane eye-wall structure in a single 20-minute pass. To do the same job with other current technology would require multiple aircraft passes over the eye during a single six- to eight-hour flight. HIRAD technology can provide hourly observations of the hurricane changes during the duration of the UAV flight.

“Today’s hurricane models with sensor inputs from manned hurricane-hunter aircraft allow the prediction of the storm path over periods of 24 to 48 hours,” Jones said. “However, the ability to predict the future intensity (hurricane category) is frequently hit or miss. Our new HS3 technology will help us understand the physics behind the intensification process, and that will lead to better predicting them in real time.”

Predicting which storms will become major hurricanes and which won’t would provide crucial information to government agencies as well as resident in preparing for a storm. Evacuations could ideally begin earlier and with better prediction, costs would be more manageable because unnecessary evacuations would be less likely.

The NASA HS3 Mission is just the most recent test for HIRAD. The sensor has evolved over time. The earlier version was flown on a NASA-piloted research aircraft in 2010 and collected data from Hurricane Earl on the Atlantic Coast and Hurricane Karl near the Yucatan peninsula. Jones said, “It’s a dream come true, to see something you developed five to 10 years ago to evolve from concept, infancy really, to prototype, to flying and contributing. It’s very satisfying, and there is a lot of potential for this technology.”

Jones is an internationally recognized expert on microwave remote sensing for NASA earth science applications. His sensors have played a role in a variety of fields from oceanography to meteorology. For example, he has played a major role in every NASA scatterometer mission flown in space from Skylab S-193 (1974, the precursor to the International Space Station) to the ISS-Rapid Scat mission, which launched last month from Cape Canaveral.

Jones has more than 40 years experience working with NASA, Department of Defense and commercial space programs. He is a professor in the department of electrical and computer engineering and the director of UCF’s Central Florida Remote Sensing Laboratory, where he and his students perform research in satellite microwave remote-sensing technology.

During his professional career, which includes federal service with NASA, aerospace industry and UCF, he has received four NASA Special Achievement Awards, 10 NASA Group Achievement Awards, the CNES Space Medal, the Aviation Week & Space Technology Space Program Award and a Naval Research Lab award among others. In addition to his research, Jones has received several awards from UCF and the IEEE for his undergraduate teaching and graduate-student mentoring. Also for his years of excellence and contributions to the field of geoscience and remote sensing, Jones was elected to the Union of Radio Scientist International (1978) and elected life fellow of the IEEE (1999).