CECS is 4th Best in Nation for Hispanics 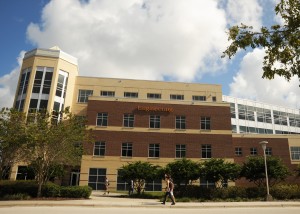 Hispanic Business Magazine ranked the UCF College of Engineering and Computer Science fourth in its 2013 Best Schools for Hispanics list, up two spots from sixth place last year. The publication ranks the top 10 graduate programs in the country in medicine, law, business and engineering.

The rankings are based on questionnaires sent in by schools, enrollments, the percentage of Hispanic faculty members, the number of programs that recruit Hispanic students, retention rates and student services.

CECS has nearly 1,300 graduate students, of which 12 percent are Hispanic. And 9 percent of postgraduate degrees are earned by Hispanics.

“CECS proudly supports UCF’s goal to become more inclusive and diverse,” said Michael Georgiopoulos, CECS dean. “Throughout the years, our college has had a strong Hispanic population in its mix, reflecting the diverse population in the central Florida region and the state. CECS’s mission is to serve well all our students so that they may attain their dreams and aspirations.”

“The more diverse CECS is, the more students are able to gain a competitive advantage in the global economic and technological market,” said Fidelia Nnadi, director of the CECS Office of Diversity and Inclusion, an office established in 2011 to improve recruitment, mentoring and retention of students from underrepresented groups.

Andres Vargas, a senior studying industrial engineering, is president of UCF’s chapter of the Society of Hispanic Professional Engineers (SHPE). With 124 members, SHPE is one of the largest engineering-related student groups at UCF and is the nation’s seventh-largest SHPE chapter.

UCF’s and CECS’s vast array of opportunities offered to students with diverse backgrounds boosts student success, according to Vargas. Groups like SHPE help students hone their leadership skills and provide camaraderie, support, volunteer opportunities and a sense of community.

“CECS’s efforts to provide its students with as many opportunities for networking, internships and jobs at closely-associated companies is commendable and make any student want to take advantage of them.”

Other engineering and computer science organizations at UCF geared to supporting diverse students include the Society of Women Engineers and the National Society of Black Engineers.