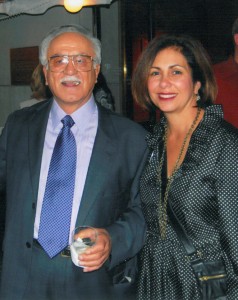 Nodarse, senior client manager at Terracon, a geotechnical engineering firm in Orlando, recently announced the S.E. “Jim” Jammal Lecture Series, so that anyone with an interest in geotechnical issues and technologies can hear from top experts in the field. The annual presentations will be held on UCF’s main campus or at other regional locations and will be open to the public.

Nodarse’s father, Jim Jammal, was a geotechnical engineer who died in December of leukemia at age 75, after a successful career as one of Florida’s premier sinkhole experts.

Jammal graduated with a mechanical engineering degree from the University of Florida in 1961 and joined a firm that specialized in geotechnical engineering, a field that investigates what can be constructed on a piece of land based on various measurements and analysis, including soil composition, the depth of the groundwater, maximum weight load and more.

On May 8, 1981, Jammal witnessed one of the most destructive sinkholes to hit Central Florida in recent decades: the Winter Park sinkhole that swallowed a three-bedroom house, a recreation center’s swimming pool and a portion of a car dealership. The office of his engineering firm was a block away from the tragedy.

The City of Winter Park hired Jammal to study the 1981 sinkhole, one of 2,000 sinkholes he studied in his lifetime.

“His research changed the understanding of sinkholes,” Nodarse said. Jammal’s studies showed that sinkholes were caused by the ground weakening below the surface, not from heavy objects above the surface. In addition, his work led to discoveries that sinkholes can happen in drought conditions and increased water consumption, in addition to periods of heavy rains and erosion.

“He realized there are zones in Central Florida that are geologically vulnerable to sinkholes due to the water level of the aquifer and their geology,” Nodarse said.

In Jammal’s Dec. 16 obituary published by the Orlando Sentinel, Nodarse shared some of her father’s biography and his words of wisdom, excerpted below in quotations.

Jammal, who immigrated to the United States in 1956, spent his later years serving as a mentor to younger engineers, instilling in them the lessons of his success: improve your writing, become proficient in public speaking, find your specialty, and always strive to become better.

“Don’t do it the way you did it before or the way other people do it. Add something more. Make it better than before,” his daughter said.

In the wisdom he passed on was his belief that in any profession you have three “I”s: Innovators who search for better answers; Imitators who do a good job of copying the innovators; and Idiots, who take you down the drain. His advice: Don’t be an idiot.

Those interested in helping to fund the endowed lecture series to ensure it is fully funded in perpetuity can visit www.ucffoundation.org. Click the “Make a Gift” button and then enter “Other” in the Designation box. Enter the code CECS000283 in the Comments box to ensure your gift is registered to the S.E. “Jim” Jammal Endowed Lecture Series. Gifts also can be made by contacting Robin Knight of CECS at

The first lecture is planned for April 3, the evening before the GMEC Conference in Orlando. Craig H. Benson, Ph.D., P.E., president of the Geo-Institute, will speak at the Hilton Altamonte Springs. Information on this lecture can be accessed by visitingwww.ucfknightsnetwork.com/jammallecture.