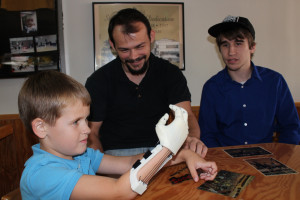 Twenty-two – that’s the number of countries represented by the hundreds of calls and emails a team of UCF engineering students has received since they designed and delivered a bionic arm to a 6-year-old boy this past July.

“We receive emails daily asking for help,” said Dominique Courbin, who is studying to earn his degree in mechanical engineering in 2016 while working and continuing to volunteer his time with the team. “It’s kind of hard to keep up.”

Courbin is one of the original Limbitless Solutions team members who designed a 3D-printed robotic arm for Alex Pring for $350 and then gave it to him for free. The team then uploaded the designs onto the Internet for anyone to use.

Since then, the team has consulted on several dozen cases around the world via Skype and email. They have custom-designed two hands and an arm and, in one case, three teammates drove straight through the night to Virginia so 7-year-old Madelyn Rebsamen could have her arm by Thanksgiving morning. they are also working on a 4.0 version of an arm with a more functional elbow to give Alex just in time for Christmas.

The busy team members often ask each other what day of the week it is and joke that sleep is “overrated.” Seeing the faces of the children and their parents when an arm is delivered makes the long hours and hustle worth it, they say.

“It’s amazing,” said team leader Albert Manero, who is in Germany on a Fulbright scholarship as he works on his doctoral degree in mechanical engineering. He holds bachelor’s and master’s degrees in aerospace engineering from UCF. “I mean, I’m just a 25-year-old with a laptop in Germany working to make a difference. I’m so happy we can engineer hope for families around the world.”

Despite being thousands of miles away and nowhere near the Manufacturing Lab at UCF where the team produces the limbs, Manero has kept moving forward responding to requests and trying to create partnerships that can extend the team’s impact. The team members, including Manero, meet weekly via videoconference to talk about their work and the many requests they receive.

The team is now part of a League of Universities and Institutions that has pledged to share the knowledge to help their local communities. Some of the members include Liberty University, Rochester Institute of Technology, Johns Hopkins Hospital, Miami Children’s Hospital, University of Southern California, University of Pennsylvania, Humanitarian Prosthetists & Orthotists, JFK Johnson Rehabilitation Institute and Cleveland State University.

Meanwhile, team members at UCF continue to answer emails and troubleshoot with other volunteers – some professional, some students – across the country who have reached out for help.

When the team receives an email, the members first try to reach out to their partners to see if anyone is closer to the person asking for help. That’s the best-case scenario, said Tyler Petresky, a sophomore majoring in computer engineering and one of the UCF team leaders. If the team members can, they make the connection and move onto the next name on their list. In some cases, there is no one else and the team reviews the situation to see what they can do and how quickly.

Then there are those requests that are extremely challenging.

One family reached out because their child has Atelosteogenesis Type 3, a rare disease that causes bone to grow incorrectly, misalign and deviate limbs. Only 20 people are known to have this condition in the world. the family asked the team if they could help with the leg braces the boy uses. Members of the team pooled together and created a senior design team to tackle the problem.

Mateo Alvarez is leading the group and is working with Nemours doctors in Delaware and Orlando to help create a more comfortable brace that will be primarily 3D printed for the child. The goal is to make the brace and exoskeleton more adaptable and more affordable.

In November, a team of volunteers in Colombia uses the team’s work to make an arm for a child. It was the first time the team’s blueprints had been used outside the United States. It was a milestone, but it is only the beginning.

“I have a dream that someday we can work with the United Nations and UNICEF to set up 3D stations around the world to help every child who can benefit from this,” Manero said. “That would really be something.”

This story, by Zenaida Kotala, was originally published on UCF Today on Dec. 23, 2014.