Seal to be Inducted into Florida Inventors Hall of Fame 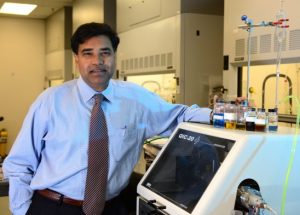 UCF scientist Sudipta Seal, whose research has led to groundbreaking therapeutic applications in regenerative nanomedicine, has been chosen as a 2018 inductee into the Florida Inventors Hall of Fame.

Seal, who is a UCF Trustee Chair, Pegasus and University Distinguished Professor, is one of seven inventors who will be inducted in September at an annual ceremony in Tampa.

“Scientific discoveries always captured my imagination and this award vindicates the scientific path I have taken to realize varied real-world applications that can be beneficial to one and all,” Seal said. “The journey has just started. The ultimate destination is getting our discoveries to the people who can benefit.”

In addition to his therapeutic applications for cancer treatments, Seal also has developed multi-functional nanomaterial additives for aerospace nanoenergetics and his research in power plant fly ash waste has created unique chemistry of ash particles with nanostructures that can be used to clean up oil spills.

“We are now expanding our research to other engineered materials for biological intervention,’ he said. “Making the lab invention reality and licensing to companies through UCF Office of Research and Commercialization is in progress.”

Nominees for the hall must have at least one U.S. patent and a connection to Florida,

Seal has 64 total U.S and international patents and is chair of the Materials Science and Engineering Department with an appointment at UCF College of Medicine. He is the former director of the Nanoscience Technology Center and Advanced Materials Processing Analysis Center. The academic units that Seal oversees are continuously creating new inventions and technology at UCF.

The Florida Inventors Hall of Fame recognizes inventors whose achieve­ments have advanced the quality of life for Floridians, the state, and the nation. The hall is at the University of South Florida in Tampa and supported, in part, by the Florida High Tech Corridor Council.