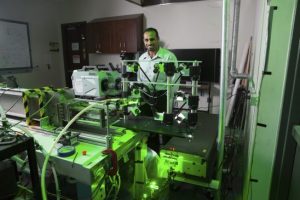 A team led by University of Central Florida engineers is using rocket science in the form of a rotating engine sparked by multiple detonation points to make coal-fueled power plants more efficient and safer for the environment.

Kareem Ahmed and Subith Vasu, assistant professors of mechanical and aerospace engineering, are leading the investigation for the U.S. Department of Energy’s Office of Fossil Energy and are the first in the country to explore the technology for fueling energy systems.

The $1.3 million project is one of nine funded by the agency and one of only three led by universities. The team will receive $1 million from the DOE and $300,000 from other resources.

Coal is one of the world’s most abundant fuel sources. Coal-fueled power plants provide a third of the electricity we have today in our homes, according to the U.S. Department of Energy but also produces carbon dioxide emissions that are a danger to the environment. Carbon dioxide is a major greenhouse gas and has been linked by scientists to global warming.    The DOE invested $12 million into the nine research projects to enable the expanded use of coal while also achieving the goal of zero pollutants.

Ahmed and Vasu’s project will explore the feasibility of using coal to power rotating detonation engines, a type of circular design that is spun by successive supersonic detonation waves.

“The goal is to have these supersonic detonation waves interact with the coal particles and fuse them into nothingness while producing significant amounts of energy, similar to planetary supernovas,” Ahmed said. “Creating conditions that will help us burn coal efficiently are crucial.”

Rotating detonation engines are actively being explored by Department of Defense for use in rocket and jet engines, which the UCF team is already involved in.

The technology could be more fuel-efficient than conventional engines because burning happens supersonically at higher pressures created by these detonations.  While the approach has not yet been explored for coal-powered energy systems, the team is predicting that in addition to requiring less power, the systems will also produce fewer emissions.

Ahmed said the reason only three university-led projects were selected is because the type of proposed high-impact work is often easier for industry to undertake.

He credits UCF’s Center for Advanced Turbomachinery and Engine Research, led by Professor Jayanta Kapat and where he and Vasu serve as faculty, as providing the partnerships with companies such as Aerojet Rocketdyne that many universities cannot offer.

“CATER offers the kind of fundamental and applied research industry needs,” Vasu said. “Most of our projects involve industry so we understand their requirements.”

Ahmed said his continuing work with Aerojet Rocketdyne on related projects was critical to obtaining the proper equipment for the research as well as familiarizing the team with the coal-fired rotating detonating combustor process. Two graduate students and one post-doctoral scholar will assist with the project.

Ahmed also spent last summer working on a U.S. Air Force Research Lab Summer Faculty Fellowship program that focused on rotating detonating engines. He also has been awarded grants from the U.S. Air Force Office of Scientific Research and Doctoral New Investigator from the American Chemical Society – Petroleum Research Fund to explore the mechanisms of turbulent deflagration-to-detonation transition and hypersonic standing detonations, both of which played a key role in the proposed work.

“Using less fuel for power generation means an incredible savings both financially and in terms of the environment,” Vasu said.