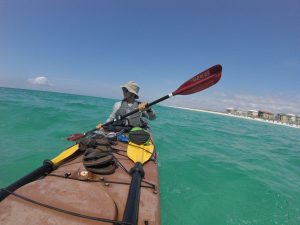 A UCF student is making waves as he paddles nearly 800 miles down Florida’s Gulf Coast this summer.

Cole Kolasa, an environmental engineering major, is documenting his summertime adventure in his blog Kayaking for Conservation. Kolasa started a Go Fund Me page in hopes of raising $10,000 to support artificial reefs in his Hernando County hometown.

The funds raised will be directly donated to Hernando County for the construction of reef balls to aid the county’s shallow reefs and living shorelines. The money will also support the sinking of a 50-foot concrete sailboat to serve as the county’s first “wreck reef” to attract divers to the coast and raise awareness for the region. He expects to complete his journey this week.

“The Gulf Coast is a beautiful area that needs to be preserved. The money raised will help bolster coastal resilience and shoreline stability,” he said during a phone interview as he paddled through the waters near Homosassa, Florida. “I want to spend my summer raising money to help fund research for local restoration projects.”

Kolasa, born and raised in Brooksville, Florida, spent three months planning his solo voyage before embarking on May 8 from Big Lagoon State Park in Pensacola. The 19-year-old is averaging about 22 miles a day — give or take a few miles depending on Mother Nature —  in his 18-and-a-half-foot sea kayak built in the 1980s.

“My kayak is meant for a trip like this,” Kolasa said. “I got stuck in three-to-five foot seas offshore, near Destin. The waves submerged my kayak underwater but I was fine.”

Kolasa’s kayak carries all of the essentials: a tent, bug suit and spray, small stove for cooking easy-to-make meals, Marine radio, flashlights, navigational system, emergency signaling devices, as well as water filtration systems and up to 25 liters of water incase there is no resupply nearby. He charges his phone with portable solar panels.

He carries nearly two weeks worth of food at a time such as trail mix and ramen noodles, and meets up with friends or family to restock along the way. After he’s paddled as far as he can for the day, he stops sleep at primitive campsites along nearby islands or beaches, and sometimes at state parks.

Kolasa has made a few friends throughout his solo-excursion. He’s paddled with the Florida Circumnavigation Saltwater Paddling Trail, as well as friends and family who’ve come out to spend the day with him.

“There’s a lot of support for a trip like this,” Kolassa said. “There’s a network of people that have helped and supported me along the way.”

Several sponsors donated supplies to help Kolasa along his journey. Those companies include Sun Bum, a sunscreen manufacturer based in Cocoa Beach, Travel Country Outfitters, who donated nearly $700 worth of outdoor gear, and Wagan Tech, a company which produces high-end outdoor electronic gear.

“This is an exciting trip for me because I’ve spent so much time outdoors hiking different trails, but this is neat because I get to do those types of activities and live simply all to aid in conservation and restoration of our ecosystems,” Kolasa said. “I’ve finally found a way I can tie two of my favorite things together.”

Kolasa plans to end his journey this June somewhere in the Florida Keys between Islamorada and Marathon. You can keep up with his adventures by following his Facebook page.