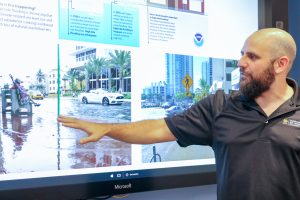 Thomas Wahl, an assistant professor in the College of Engineering and Computer Science, is helping the United Nations better understand and communicate climate change to the world.

Wahl, who is based in the Department of Civil, Environmental and Construction Engineering and also is a member of UCF’s Sustainable Coastal Systems Cluster, will serve as a contributing author to the UN’s Intergovernmental Panel on Climate Change, which in 2007 earned a Nobel Peace Prize for its work on one of its previous assessment reports.

The panel is an international collection of experts who assess the science related to climate change and its potential environmental and socio-economic impacts. The report is compiled every six years and is shared with scientists, stakeholders and policy makers around the world.

Wahl will contribute to a chapter about sea level rise. His area of expertise is extreme sea levels from high tides, storm surges and/or waves leading to coastal flooding and erosion.

“This is quite the recognition for Dr. Wahl,” says Debra Reinhart, associate vice president for research and scholarship. “The report is considered the reference document for policymaking related to climate change.”

The IPCC and former Vice President Al Gore earned the prize in 2007 “for their efforts to build up and disseminate greater knowledge about man-made climate change, and to lay the foundations for the measures that are needed to counteract such change,” according to the Nobel Peace Prize website.

Wahl says he’s honored and humbled to be working with the team.

“This is a very active research field where great progress has been made in the last few years,” he says. “The challenge will be to pull all this information together and present it in a comprehensive, yet concise way.

Wahl joined UCF in 2017. He has a doctorate in civil engineering from the University of Siegen in Germany and has been studying sea level rise, storm surges and the resulting impacts for years, publishing papers and giving presentations around the world. Other areas of his research include multi-hazards, coastal engineering design concepts, and climate adaptation and resilience.