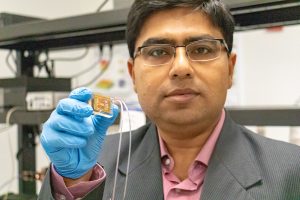 Using nanotechnology, UCF researchers have developed the first rapid detector for dopamine, a chemical that is believed to play a role in various diseases such as Parkinson’s, depression and some cancers.

The new technology was described in a recent study in the journal Nano Letters.

More than half a million people in the United States have Parkinson’s and major episodes of depression affect about 16 million adults a year.
Current methods to detect dopamine are time consuming, require rigorous sample preparation, including blood-plasma separation, as well as specialized laboratory equipment. With this device, however, a few drops of blood on a palm-sized, rectangular chip is all that is needed.

“A neurotransmitter like dopamine is an important chemical to monitor for our overall well-being so we can help screen out neural disorders like Parkinson’s disease, various brain cancers, and monitor mental health,” says Debashis Chanda, an associate professor in UCF’s NanoScience Technology Center and the study’s principle investigator. “We need to monitor dopamine so that we can adjust our medical doses to help address those problems.”

Plasma is separated from the blood within the chip. Cerium oxide nanoparticles, which coat the sensor surface, selectively capture dopamine at microscopic levels from the plasma. The capture of dopamine molecules subsequently changes how light is reflected from the sensor and creates an optical readout indicating the level of dopamine.

Sudipta Seal, an engineering professor and chair of UCF’s Department of Materials Science and Engineering, says the use of cerium oxide nanoparticles was an important part of the sensor’s success.

“Getting the sensor to be sensitive to dopamine had been quite the challenge for researchers for a while, but using altered cerium oxide nanostructures on the sensing platform was key in making the sensor work,” Seal says.

Chanda co-developed the sensor with Abraham Vazquez-Guardado ’16MS ’18PhD, a graduate of UCF’s College of Optics and Photonics and now a postdoctoral fellow at Northwestern University.

Vázquez-Guardado says reduced steps and processing make the test cost effective, and it can also be performed at the patient’s side rather than in a separate lab.

“There is no preprocessing needed,” he says. “Our plan was to make a much quicker, enzyme-free kind of detection.”

Study co-authors also included Swetha Barkam ’13MS ’17PhD, a UCF materials science and engineering graduate and Order of Pegasus recipient, now at Micron Technology; Madison Peppler ’17, a graduate of UCF’s Department of Chemistry; Aritra Biswas, a doctoral student in the College of Optics and Photonics; Wessley Dennis, a UCF student supported by UCF’s Research and Mentoring Activities program; and Soumen Das, a postdoctoral fellow in the center who now works in the medical industry.

Chanda has a joint appointment in UCF’s Department of Physics and College of Optics and Photonics. He received his doctorate in photonics from the University of Toronto and worked as a postdoctoral fellow at the University of Illinois at Urbana-Champaign. He joined UCF in 2012.

Seal has a doctorate in materials engineering with a minor in biochemistry from the University of Wisconsin and was a postdoctoral fellow at the Lawrence Berkeley National Laboratory, University of California Berkeley. He is a Pegasus Professor and is affiliated with UCF’s Advanced Materials Processing Analysis Center and Nanoscience Technology Center. He is also a member of UCF’s Prosthetic Interfaces cluster and holds a secondary joint appointment in UCF’s College of Medicine. He joined UCF in 1997.

Part of the plasmonic sensor research was funded with support from the National Science Foundation and Northrop Grumman’s University Research Program.