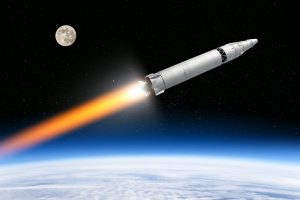 A University of Central Florida researcher and his team have developed an advanced new rocket-propulsion system once thought to be impossible.

The results were published this month in the journal Combustion and Flame.

“The study presents, for the first time, experimental evidence of a safe and functioning hydrogen and oxygen propellant detonation in a rotating detonation rocket engine,” says Kareem Ahmed, an assistant professor in UCF’s Department of Mechanical and Aerospace Engineering who led the research.

The rotating detonations are continuous, Mach 5 explosions that rotate around the inside of a rocket engine, and the explosions are sustained by feeding hydrogen and oxygen propellant into the system at just the right amounts.

This system improves rocket-engine efficiency so that more power is generated while using less fuel than traditional rocket energies, thus lightening the rocket’s load and reducing its costs and emissions.

Mach 5 explosions create bursts of energy that travel 4,500 to 5,600 miles per hour, which is more than five times the speed of sound. They are contained within a durable engine body constructed of copper and brass.

The technology has been studied since the 1960s but had not been successful due to the chemical propellants used or the ways they were mixed.

Ahmed’s group made it work by carefully balancing the rate of the propellants, hydrogen and oxygen, released into the engine.

“We have to tune the sizes of the jets releasing the propellants to enhance the mixing for a local hydrogen-oxygen mixture,” Ahmed says. “So, when the rotating explosion comes by for this fresh mixture, it’s still sustained. Because if you have your composition mixture slightly off, it will tend to deflagrate, or burn slowly instead of detonating.”

Ahmed’s team also had to capture evidence of their finding. They did this by injecting a tracer in the hydrogen fuel flow and quantifying the detonation waves using a high-speed camera.

“You need the tracer to actually see that explosion that is happening inside and track its motion,” he says. “Developing this method to characterize the detonation wave dynamics is another contribution of this article.”

William Hargus, lead of the Air Force Research Laboratory’s Rotating Detonation Rocket Engine Program, is a co-author of the study and began working with Ahmed on the project last summer.

“As an advanced propulsion spectroscopist, I recognized some of the unique challenges in the observation of hydrogen-detonation structures,” Hargus says. “After consulting with Professor Ahmed, we were able to formulate a slightly modified experimental apparatus that significantly increased the relevant signal strength.”

“These research results already are having repercussions across the international research community,” Hargus says. “Several projects are now re-examining hydrogen detonation combustion within rotating detonation rocket engines because of these results. I am very proud to be associated with this high-quality research.”

The study was supported with funding from the U.S. Air Force Office of Scientific Research and an Air Force Research Laboratory Contract.

The research was performed at UCF’s Propulsion and Energy Research Laboratory.

Ahmed earned his doctoral degree in mechanical engineering from University at Buffalo – The State University of New York. He worked at Pratt & Whitney Military Engines and Old Dominion University prior to joining UCF’s Department of Mechanical and Aerospace Engineering, part of UCF’s College of Engineering and Computer Science, in 2015. He is the director of UCF’s Propulsion and Energy Research Laboratory, a faculty member of UCF’s Center for Advanced Turbomachinery and Energy Research, associate fellow of the American Institute of Aeronautics and Astronautics, AFRL Faculty Research Fellow, and a member of UCF’s Renewable Energy and Chemical Transformation Cluster.