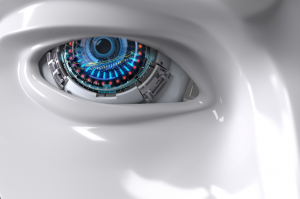 University of Central Florida researchers are helping to close the gap separating human and machine minds.

In a study featured as the cover article appearing today in the journal Science Advances, a UCF research team showed that by combining two promising nanomaterials into a new superstructure, they could create a nanoscale device that mimics the neural pathways of brain cells used for human vision.

“This is a baby step toward developing neuromorphic computers, which are computer processors that can simultaneously process and memorize information,” said Jayan Thomas, an associate professor in UCF’s NanoScience Technology Center and Department of Materials Science and Engineering. “This can reduce the processing time as well as the energy required for processing. At some time in the future, this invention may help to make robots that can think like humans.”

Roy said a potential use for the technology is for drone-assisted rescues.

“Imagine a drone that can fly without guidance to remote mountain sites and locate stranded mountaineers,” Roy said. “Today it is difficult since these drones need connectivity to remote servers to identify what they scan with their camera eye. Our device makes this drone truly autonomous because it can see just like a human.”

“Earlier research created a camera which captured the image and sent it to a server to be recognized, but our group created a single device that mimics the eye and the brain function together,” she said. “Our device can observe the image and recognize it on the spot.”

The trick to the innovation was growing nanoscale, light-sensitive perovskite quantum dots on the two-dimensional, atomic thick nanomaterial graphene. This combination allows the photoactive particles to capture light, convert it to electric charges and then have the charges directly transferred to the graphene, all in one step. The entire process takes place on an extremely thin film, about one-ten thousandths of the thickness of a human hair.

Basudev Pradhan, who was a Bhaskara Advanced Solar Energy fellow in Thomas’ lab and is currently an assistant professor in the Department of Energy Engineering at the Central University of Jharkhand in India, and Sonali Das, a postdoctoral fellow in Roy’s lab, are shared first authors of the study.

“Because of the nature of the superstructure, it shows a light-assisted memory effect,” Pradhan said. “This is similar to humans’ vision-related brain cells. The optoelectronic synapses we developed are highly relevant for brain-inspired, neuromorphic computing. This kind of superstructure will definitely lead to new directions in development of ultrathin optoelectronic devices.”

“Such features can also be used for aiding the vision of soldiers on the battlefield,” she said. “Further, our device can sense, detect and reconstruct an image along with extremely low power consumption, which makes it capable for long-term deployment in field applications.”

Neuromorphic computing is a long-standing goal of scientists in which computers can simultaneously process and store information, like the human brain does, for example, to allow vision. Currently, computers store and process information in separate places, which ultimately limits their performance.

To test their device’s ability to see objects through neuromorphic computing, the researchers used it in facial recognition experiments, Thomas said.

They found that their device was able to successfully recognize the portraits of four different people.

The researchers said they plan to continue their collaboration to refine the device, including using it to develop a circuit-level system.

Thomas joined UCF in 2011 and is a part of the NanoScience Technology Center with a joint appointment in the College of Optics and Photonics and the Department of Materials Science and Engineering in the College of Engineering and Computer Science. Previously, Thomas was at the University of Arizona in its College of Optical Sciences. He has several degrees including a doctorate in chemistry/materials science from Cochin University of Science and Technology in India.

Roy joined UCF in 2016 and is a part of the NanoScience Technology Center with a joint appointment in the Department of Materials Science and Engineering, the Department of Electrical and Computer Engineering and the Department of Physics. Her recent National Science Foundation CAREER award focuses on the development of devices for artificial intelligence applications. Roy was a postdoctoral scholar at the University of California, Berkeley prior to joining UCF. She received her doctorate in electrical engineering from Vanderbilt University.