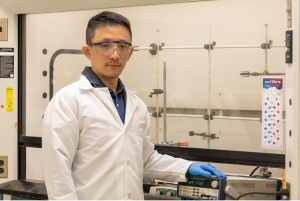 Electric cars are a low-emission alternative to combustion engines; however, their lithium-based batteries can catch fire, thus posing a safety threat that limits the technology.

A University of Central Florida researcher is working to overcome that problem by designing fuel cells that are safer, more powerful and less expensive.

The work is detailed in a new study published in the journal Angewandte Chemie.

“This is really important because electric cars and electric transportation powered by fuel cells might be the future solution to our energy and environmental problems,” said Yang Yang, an assistant professor in UCF’s NanoScience Technology Center and study co-author.

The key to the safer fuel cells is the use of platinum in their design; however, the high cost of the precious metal has kept the alternative energy source too expensive to be a viable solution.

Yang and his team have found an answer to the problem by developing a nanomanufacturing process using oxygen bubbles to create a porous framework in the fuel cell that results in the need for only trace amounts of platinum. The conductive porous framework is made of a platinum and nickel alloy that can convert hydrogen as a fuel source into electricity.

By creating the porous surface, the researchers have reduced the amount of platinum needed in the fuel cell by 90 percent.

“We just use 10 percent of the platinum that’s used in current platinum-based fuel cells, but we achieve comparable performance to them” Yang said. “We are trying to reduce the cost using our really unique and advanced manufacturing process.”

The use of platinum-based fuel cells could one day not only make future electric cars safer, but also able to travel farther, Yang said.

“The fuel cell has a much higher energy density than the lithium battery and that means after a single charge you can power the vehicles for a longer distance,” he said.

In the study, the researchers demonstrated the oxygen bubble technique and determined the optimum amount of pores that could be made in the material without losing performance.

“The advanced nanomanufacturing technique represents a revolutionary breakthrough in many fields including manufacturing, materials engineering, and the energy industry,” Yang said.

Study co-authors included Guanzhi Wang, a Ph.D. candidate in UCF’s Department of Materials Science and Engineering, and Zhenzhong Yang and Yingge Du with the Pacific Northwest National Laboratory.
Yang holds joint appointments in UCF’s NanoScience Technology Center and the Department of Materials Science and Engineering. He is a member of UCF’s Energy Conversion and Propulsion Cluster.

Before joining UCF in 2015, he was a postdoctoral fellow at Rice University and an Alexander von Humboldt Fellow at the University of Erlangen-Nuremberg in Germany. He received his doctorate in materials science from Tsinghua University in China.