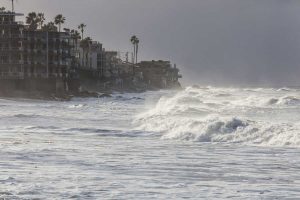 Accurately predicting how many people are at risk due to sea level rise and storm surges has always challenged scientists, but a new method is improving models that account for the impact of these natural occurrences.

A new international study published this week in the journal Nature Communications, applied a novel statistical method that — for the first time — captures the important interactions between tides and storm surges. These natural forces are caused by meteorological effects, such as strong winds and low atmospheric pressure, and their impacts have often been difficult to understand because of the complexity of Mother Nature.

“It’s important to have good models that can help planners understand and prepare for the negative consequences of a warming climate,” says Thomas Wahl, a University of Central Florida assistant professor of engineering and a co-author of the study.

Using the new method, the team found the number of people at risk from coastal flooding and the associated costs to coastal communities may have been previously over-estimated.

For example, the new method in the study found the number of people at risk from coastal flooding along the UK North Sea coast is 5 percent lower and the direct costs associated with it are 7 percent lower.

“Global studies often include uncertainties, because the interplay between the natural processes are ignored, although they largely determine how high the water really piles up along the coast during extreme events,” says Arne Arns, an assistant professor of agricultural and environmental Sciences at the University of Rostock in Germany who led the study.

For the U.S. coasts the reduction is more pronounced, leading to 17 percent less people affected and 13 percent lower costs.

“From our results, we cannot really conclude the consequences of future sea level rise will be less serious than we currently anticipate, but it highlights where uncertainties in our methodologies exist and where future research efforts should be directed to better capture all relevant processes,” Arns says.

These new estimates can be useful at the global level and at the local level to aid in improving coastal protection, especially when there is a lack of data or limited access to more complex computer models for smaller communities, the authors say.

In the past when scientists conducted similar studies, they used information derived from computer models that approximate nature’s physical processes, which cause tides and storm surge. Such models are vital for global assessments, because measurements from all coastal locations do not exist. However, the new method could be more accurate.

“We have now a generalized approach with which we can re-evaluate the outcomes of previous studies and derive more robust conclusions in future assessments,” says Wahl, who joined UCF in 2017. He is a member of UCF’s National Center for Integrated Coastal Research which conducts research to support coastal communities. The center aims to link the ecological security of coastal ecosystems with the economic security of coastal communities, ensuring the sustainability of coastlines and economy.

Wahl also has a doctorate in civil engineering from the University of Siegen in Germany and has been studying the sea-level rise and its impacts for years, publishing papers and making presentations around the world. Other areas of his research include sustainability of human-natural systems in coastal zones, coastal engineering design concepts, and climate adaptation and resilience.