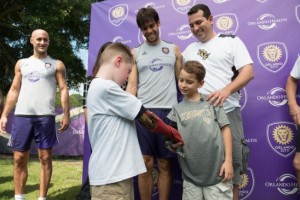 Orlando City Soccer Club and Limbitless Solutions – a UCF-based team of engineering students and others – partnered today to change the life of a 6-year-old boy forever.

Paulo Costa Boa Nova and his father, Claudio Boa Nova, traveled from Brazil to Orlando, courtesy of Orlando Health, where they met with the engineering students who created a 3D-printed arm for the boy. Paulo was born without part of his arm because of a genetic defect. The new arm, made with 3D-printed materials and themed after one of Brazil’s soccer teams, was given to the family for free.

Limbitless Solutions team members joined the Major League Soccer club at its training facility in Sanford to make the presentation. Team captain and fellow Brazilian Kaká joined other team members to shake hands with the family and congratulate Limbitless members for their humanitarian work.

Orlando City team members, including goalkeeper Tally Hall and defender Aurélien Collin, also kicked the ball around with Paulo and the UCF students. This was the first international delivery for the group of volunteer students who use their spare time to make arms in a lab at UCF’s main campus.

“I don’t have the words for how grateful we are,” said Claudio Boa Nova. “When I saw arms they do on YouTube, I hold onto hope for the opportunity for my son. I can’t believe today, his dream came true.”

Orlando City will celebrate the students’ work by recognizing Paulo, his father and several Limbitless Solutions team members during the Lions’ match Saturday, July 18, against the New York Red Bulls at the Orlando Citrus Bowl. The game starts at 7:30 p.m.

“As an organization, we are thrilled to partner with UCF and Orlando Health for this very special presentation to Paulo,” said Leonardo Santiago, vice president of communications for the team. “He’s got the true heart of a Lion, having shown tremendous spirit and courage. Hats off as well to the Limbitless Solutions team from UCF on their hard work and dedication – they have changed Paulo’s life, and those of many other children, for the better.”

The UCF students have been making 3D-printed arms since last summer when the team’s founder and Fulbright Scholar, Albert Manero, (’12, ’14) heard about central Florida 6-year-old Alex Pring, who had a similar need. Manero pulled together a group of his friends and classmates and within eight weeks built an arm for Alex at a cost of about $350. Alex watched alongside his mother Friday as Paulo tried his arm on at the soccer field and cheered. He shook Paulo’s new hand with his Iron Man-themed arm and kicked the ball around with Orlando City players.

In the past year, Limbitless Solutions became a nonprofit and has delivered six arms to children throughout the nation. Earlier this summer, Stratasys, a 3D printer company, donated one of its newest printers to help the team continue its efforts. Each custom-made arm is delivered in a special way based on the child’s interests.

“This is what it is all about,” Manero, a mechanical engineering doctoral student, said as he watched Paulo flex his new arm and smile. “To change a life, to make a difference. That’s why we do this.”

The team’s work has earned kudos from Hollywood stars, including Robert Downey Jr. (aka Iron Man), and companies such as Microsoft and Blue Man Group. International media also picked up on the team’s humanitarian efforts, and ABC’s Good Morning America featured another delivery last month that involved two famous dolphins.

The UCF students involved in Limbitless Solutions are pursuing different degrees from engineering to art, and most go to school full-time and juggle part-time jobs.

They build the hands and arms in the UCF College of Engineering and Computer Science’s Maker Space Lab complex between classes, work shifts and on weekends. The students receive hundreds of requests for help via email each week from around the world. There are four arms in production and another 200 children on a waiting list. The team seeks partners for each delivery to create memorable experiences based on the child’s interests.

Limbitless Solutions’ members believe no child should have to live without a limb because of cost, and that everyone should dream big and aspire to change the world.

This article was adapted from a July 17, 2015 article published on UCF Today by Zenaida Kotala.