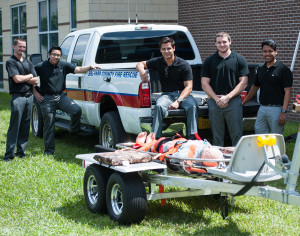 Beach rescue operations in Brevard County have been streamlined, thanks to a team of UCF mechanical engineers who graduated last week.

The idea for the Ocean Rescue Response Trailer dates back to 1996 when teenager Jeff Scabarozi became a lifeguard in Brevard County and began seeing the need for an all-in-one rescue trailer that was versatile enough to tow, transport and more during beach emergencies.

In ocean rescue departments nationwide, two different types of trailers are used: a street trailer that is licensed and tagged to transport personal watercraft to beach locations; and a beach trailer that moves the watercraft on the sand with balloon tires.

As a mechanical engineering student at UCF, Scabarozi partnered with fellow students Joseph Detig, Nick Johnson, Viet Le, Alejandro Rodas and Charles Wright to achieve his goal. In their senior year, the team designed and produced a triple-purpose trailer that can carry a personal watercraft on both the street and soft beach sands, plus it transforms into a rolling stretcher to enable CPR from the beach to ambulance.

“Jeff saw how many different ways trailers could be made better, brought it to us as a group, and we loved it and joined in,” said Johnson, who knew Scabarozi prior to attending UCF. “The design decreases the response time from getting to the call to getting the victim to the ambulance.”

The customized trailer, carrying a personal watercraft, is towed to a beach access point by a truck. Next, beach tires are placed onto the trailer’s engineered secondary axle, and the trailer is attached to a utility task vehicle (or UTV) for transport onto the beach.

During an emergency, lifeguards use the UTV to take the watercraft to the scene and launch it. The victim, once retrieved, is treated while in transit, thanks to a stretcher that is strapped into the trailer. With enough room designed in the back of the trailer, lifeguards begin emergency medical procedures as the victim is driven off the beach to an awaiting ambulance.

By virtue of the trailer’s versatility, rescue times are saved. In addition, they are enhanced by the trailer’s maximum speed on sand, about 30 mph vs. the traditional 5 to 10 mph.

The Senior Design project began last fall lasted two semesters, with each student required to spend at least 150 hours on the project each semester. Team members said they devoted many more.

Scabarozi, now chief of Brevard County Ocean Rescue, was the lead on the project. He handled the budget, ordered parts, helped fabricate components and secured proper testing. Johnson was the design engineer, while Le was the lead CAD engineer. Wright and Detig were design engineers, and Rodas focused on analysis and testing.

On regular roads, the team used normal street tires that are equipped on a trailer. For the beach, the secondary axle was added, utilizing a sturdy steel bearing design and tires from heavy-duty lawn equipment, to provide a smoother ride on sand. Also, the tires were functional at lower pressures and effectively carried the required weight load through soft sand without getting stuck.

The team tested the trailer for a load of 1,400 pounds without failure. A Sea-Doo SPARK watercraft, for example, weights slightly more than 400 pounds. The project’s construction cost was estimated at $3,000 without labor costs, although that price included enough aluminum to customize a second trailer. Construction took roughly three weeks, although team members didn’t work on the trailer continuously. Actual manufacturing time is projected at about one week.

According to team members, there were no major hurdles during the project, aside from the trial and error of a few different designs on the secondary axle.

Scabarozi, who returned for a second degree from UCF after receiving a bachelor’s in business management in 2005, sees market potential. At present, one trailer in Brevard County has been retrofitted with the new design, with two others planned. The county could prove to be an excellent test ground. Its lifeguard program has approximately 100 seasonal lifeguards and has five year-round lifeguard tower locations along with 19 seasonal locations, all under Scabarozi’s charge.

During the Senior Design Showcase, Scabarozi was presenting the new trailer concept at the U.S. Lifesaving Association National Conference in Texas, where feedback was promising, he said. In August, he plans to attend another major marketing venue, the 2015 USLA National Lifeguard Championships in Daytona Beach.

Product testing, meanwhile, is ongoing, and Scabarozi is looking to the future. He acknowledges that his new UCF engineering degree brings a whole new world of opportunities. He envisions a career either as a mechanical engineer or an entrepreneur.