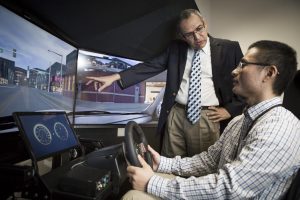 University of Central Florida researchers have beat nearly 50 other teams in a national traffic-safety improvement competition and now find themselves the only university team among the five finalists that include industry giants Ford and Uber.

Their entry, Real-Time Crash Visualization Tools for Traffic Safety Management, is a computer program that uses big data to predict, and hopefully prevent, traffic accidents before they happen.

Mohamed Abdel-Aty, a Pegasus Professor and chair of the UCF Department of Civil, Environmental and Construction Engineering, leads the research.

Using information including real-time traffic data, weather, history of past accidents and violations, and other data, the program employs advanced algorithms to predict if the risk of an accident is increasing or decreasing and presents the probability in an easy-to-understand visual readout alongside a map overlaid with current traffic-flow conditions.

The idea is that if the risk of an accident rises, then transportation officials could implement measures on the spot to reduce the risk, such as reduced speeds, metered ramps and messages warning drivers of perilous conditions ahead.

The national competition, known as the Solving for Safety Visualization Challenge, is sponsored by the U.S. Department of Transportation. Abdel-Aty’s team has progressed to stage II of the competition. They will find out in January if they become one of two finalists to progress to stage III. The winning team will receive $250,000.

Abdel-Aty said his team’s tool represents a proactive approach to helping vehicular travel become safer by recognizing dangerous roadways, intersections and conditions before the statistics about their hazards pile up.

“We have about 30,000 traffic fatalities per year in this country, and millions of injuries,” Abdel-Aty said. “It’s too much. We have to change our thinking. So, for the first time, our system could make real-time improvements based on very rich data and very sophisticated algorithms and allow operators to see on the screen visually the different trends and different dynamics of what’s happening so they can make better decisions.”

Abdel-Aty said he’s proud to have been selected as a semifinalist in the competition and have the chance for his research to be implemented into practice.

“We are the only university selected for stage II. To be in the company of Uber and Ford and these big companies with unlimited resources, while we are working with students, shows that we are doing very well,” he said. “Also, to finally reach a stage where all of the ideas that have been developed over the years, published, cited and well-appreciated could be applied. This might be our opportunity to make a difference. So definitely it is very exciting.”