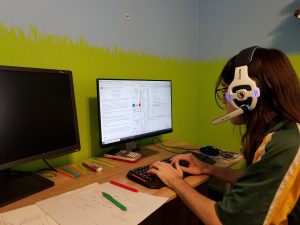 An in-person camp was originally planned to be held this week on UCF’s main campus in Orlando, but event planners shifted to the online camp format in March as news of the global coronavirus pandemic emerged.

“These students must continue to have the opportunity to hone their skills, which will benefit not only their futures but also the companies, government agencies and universities that will hire them,” says UCF Board of Trustees Chair Beverly Seay, who has long been involved with ICPC and championing computing talent across the country.

Forty-three teams signed up to participate remotely from 29 different institutions. During each session of the virtual camp, student teams work through simulated world-level competitions and receive feedback and analysis of their performance from trainers with proven experience and success on the global stage.

“An institutionalized approach toward algorithmic problem-solving and its associated activities is long overdue in North America,” says Richard Peng, an assistant professor in Georgia Tech’s College of Computing and lead trainer. “This camp is providing, in the short term, a new resource for all the participating teams, and in the longer term, a starting point for the development of a community for students and instructors focusing on algorithmic problem-solving.”

The goal is to prepare camp attendees for the 2020 ICPC World Finals, where the top 130 three-person teams will compete after advancing from regional or national contests among 15,000 teams from hundreds of universities around the globe. Originally planned for June in Moscow, the world contest may be held later this year due to the global pandemic.

Preparing for the Global Stage

This week’s camp attendees represent the top-ranked student teams in North America who will compete in the world contest. Their ranking was determined after competing among 59 teams in the ICPC North America Programming Competition hosted by Georgia Tech on Feb. 22, the first time a championship-level programming competition was held for the entire continent. Previously in North America, teams advanced to world finals after winning regional contests in the United States and Canada. “It was a very good idea to add the additional level [North America Championship] between the regional and world finals,” says Ali Orooji, UCF Programming Team faculty advisor. “It was good for teams to see how they compare against other universities in North America.”

“The camp has been a fantastic opportunity to train with the greatest ICPC teams in North America,” says David Harmeyer, one of the three UCF students who will compete on the university’s world finals team. “It’s helpful that the camp is led by trainers who are really good at competitive programming themselves.”

Seay, who was a driving force to add the championship and the training camp, says the United States and Canada need to be more competitive in computer science, both in student competitions and in the high-tech workforce.

“With the need for more computing talent across the country, it is our responsibility to groom the leaders of tomorrow in computer science and related areas,” says Seay. “We need to be more competitive internationally and invest in events that give our students opportunities to showcase their best skills to industry and government.”

“In the almost 20 years that I’ve been involved in the ICPC, I’ve seen the strongest performances by teams where investment in training and practice is prioritized. The top teams have typically attended at least one camp,” he says. “The teams from North America are already competitive at the ICPC World Finals. This camp is a great way to assist the North America teams in their quest to win this world-level Battle of the Brains.”

Supporting the Next Generation of Computing Talent

While this year’s camp had to be adapted to an online format, organizers say they plan to continue growing this initiative to prepare more teams to compete in the top tier among their international peers — leading the way for a greater North American footprint in the computing field for many years to come.

To offset the costs for attendees, the camp is sponsored by Universal Parks and Resorts, the National Security Agency, L3Harris Technologies, Northrop Grumman and others that have an interest in recruiting the nation’s brightest computer science students.

The camp is intended to provide companies and agencies opportunities to get to know and recruit top computing students for future job or internships. With the change to the online training camp format, sponsors have been provided participants’ resumes.

Universal Parks and Resorts, a major employer in Orlando, invested in the North America Programming Camp as a premier sponsor to support the next generation of computing talent.

“We understand the importance of technology to the future of our community and our business,” says UCF Trustee John Sprouls, executive vice president and chief administrative officer for Universal Parks & Resorts. “We want to strongly support STEM education and programs that motivate and recognize highly talented tech students.”

Learn more about the camp and view the program.