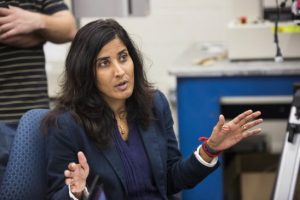 UCF engineers are leading a project that could ultimately make gas turbines, such as those used to generate power and run jet engines, safer and more efficient.

The project, led by Seetha Raghavan, associate professor, Department of Mechanical and Aerospace Engineering, and co-investigator Ranajay Ghosh, assistant professor, Department of Mechanical and Aerospace Engineering, focuses on using optics and sensors along with advanced computational analysis to develop monitoring techniques to make sure that the thermal coatings surrounding the hottest sections of turbine engines do not overheat or degrade while the engine is in motion. Ultimately the research could make turbomachinery operation safer, improve efficiency and reduce emissions.

The UCF project is one of nine in six areas funded by the U.S. Department of Energy’s Office of Fossil Energy.

Raghavan’s project was the only one in the nation funded under the topic addressing Advanced Instrumentation and will receive $880,000. That includes $150,000 from Siemens Power Generation, which will be used as fellowships to support three graduate students. Sanjida Jahan, Peter Warren and Lin Rossmann will contribute to the project by conducting research at UCF and the Argonne National Laboratory in Illinois. The team is part of UCF’s Center for Advanced Turbomachinery and Energy Research, which is a leader in the area of turbomachinery research.

“This research project provides excellent opportunities for our team to work closely with industry as well as a national laboratory,” Raghavan said.

The team will conduct experiments in extreme environments and advanced computational analysis to develop techniques and instrumentation that better monitor coating integrity with the goal of enabling higher turbine temperatures in the engines. Achieving higher temperatures would mean greater efficiency in converting the chemical energy of the jet’s fuel into mechanical work. Emissions also would be reduced. This is significant for both jet engines and turbines used for power generation.

Using optics and sensors will enable the researchers to monitor the coatings surrounding the engine, protecting metal blades and other parts from heat beyond what they could typically endure.

The work will be done in three phases:

Raghavan said UCF’s alignment with industry, including Siemens Power Generation and GE Aviation, were beneficial in the receipt of the grant. The college has ongoing programs such as internships and faculty fellowships with Siemens and also works with the gas-turbine industry on funded research projects.

While the initial research will be done by replicating extreme engine environments at laboratory-scale, Raghavan said the ultimate goal is to develop a system that can be used in working turbine engines.

Engineering faculty Kareem Ahmed and Subith Vasu also received a $600,000 subcontract on another project funded under this particular DOE program. The researchers are also members of CATER.