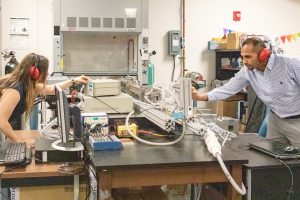 People can travel from the University of Central Florida to Orlando International Airport in about 30 minutes, barring heavy traffic. But what if they could travel from New York to Los Angeles in that time or less?

A recent discovery made at UCF could bring travelers one step closer to turning that fantasy into reality. The results of the study were recently published in the 2019 Proceedings of the Combustion Institute.

Aerospace engineering assistant professor Kareem Ahmed and his research team in the UCF Propulsion and Energy Research Lab found that subsonic flames, like those in a candle or a campfire, can be turned into hypersonic flames. With a certain amount of “turbulent mixing,” hypersonic flames burn at an extremely high rate.

Turbulent mixing refers to the right recipe that converts a flame into a self-sustaining explosion that uses all of the ingested fuel and air to release a massive amount of energy.

This discovery can provide insight into dealing with intense fires and massive explosions, but it can also be used to create engines and aircrafts that would allow people to travel by plane or train from one coast to another in fewer than 30 minutes.

The goal is to use this knowledge to design engines that propel objects at five times the speed of sound or above, using less fuel. More research would be needed to determine the effects of this kind of travel on the human body, as well as to develop controlled environments for passengers and pilots.

“This new discovery is key for using these high-Mach fast flames for hypersonic air-breathing scramjet propulsion engines, a specific type of engine that can propel an aircraft to five times the speed of sound and above,” Ahmed says. “And it will aid in fighting intense fires and explosions.”

To conduct the experiments, the team measured flame speeds in a turbulent shock tube using a high-speed laser and camera diagnostics.

Ahmed’s team uncovered these findings during the past year, and the research is already winning awards. The Combustion Institute, a nonprofit scientific society that promotes research in combustion science and technology, selected his paper as one of 13 distinguished paper award winners from the 37th International Symposium on Combustion in 2018. This is the first time that a UCF faculty member has received this award.

The Combustion Institute recognized “Compressible turbulent flame speeds of highly turbulent standing flames,” in the Detonations, Explosions and Supersonic Combustion category. Mechanical and aerospace engineering doctoral students and former Burnett Honors Scholars Jonathan Sosa ’15 ’18MS and Jessica Chambers ’16 ’18MS — who worked with Ahmed at the PERL lab — co-authored the paper. It was also one of 639 papers that were accepted to the symposium out of the 1,600 that were submitted.

Sosa says that it’s fascinating to see their findings shed light on the fundamental understanding of newfound high-Mach number flames.

“But also, these laboratory scale experiments are capable of providing crucial information on the flame behavior for the advancement and design of hypersonic vehicles as well as providing new insight into how these fast flames propagate to deter flame propagation leading to explosions,” Sosa says.

Ahmed earned his doctoral degree in mechanical engineering from University at Buffalo — The State University of New York. He worked at Pratt & Whitney and Old Dominion University prior to joining UCF as an assistant professor in 2015.