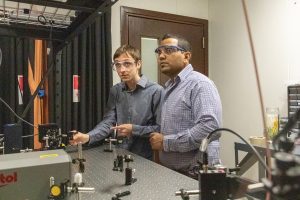 The inside of a fire might be the last place one would explore, but a new University of Central Florida method to do just that could lead to advances in fighting fires, creating cleaner engines and even space travel.

Associate professor Subith Vasu and mechanical engineering doctoral student Zachary Loparo ’15 ’17 MS in UCF’s Department of Mechanical and Aerospace Engineering and Center for Advanced Turbomachinery and Energy Research, developed the technique. Their findings are reported in a new study in the journal Optics Letters.

Researchers need to know what is going on in a fire or explosion to better understand how to increase or decrease its combustion potential as well as to analyze the molecules involved and their roles in the reaction.

However, the inside of fire is not the easiest place to obtain measurements.

“You have this high temperature, pretty noncompromising environment,” Vasu says. “To know what is going on inside you can’t send like a probe into it because it will just melt. So, you have to come up with ways to look inside and measure, for example, the temperature and the exact concentration of molecules burning.”

The fire can cause molecules to change at speeds as fast as a millionth of a second and knowing these details is important in designing better engines and techniques to propel everything from a car to a rocket ship, Vasu says.

For example, researchers can use the information to design more efficient engines that propel, but minimize the amount of fuel required. If fuel loads required to break through Earth’s gravity could be reduced on spacecraft for example, it could help people get to Mars and beyond sooner, Vasu says.

Learning more about how fuel burns in an engine can also help researchers develop strategies to reduce their toxic emissions, which would help with air quality, Vasu says.

Another application is for fighting fires, including wildfires. The technique can allow researchers to gain more understanding of how fire retardants work when applied, thus enabling them to design compounds best suited to put out different types of blazes.

The same approach can also be used to maximize the explosive potential of a compound by ensuring that fires get hot enough to completely destroy a potential threat, such as chemical weapons.

Researchers can also use the insights gained by the method to improve existing models of combustion reactions.

The technique works by using a laser to analyze the reaction. A laser is shot through a fire or explosion and is caught on the other side using a detector. As the laser passes through a combustion reaction it loses some of its power as it travels through the fire’s heat and encounters different molecules involved in the combustion, such as carbon monoxide.

By knowing how much of the power decreases, researchers can calculate temperature as well as concentrations of different molecules.

The laser scans the combustion in microseconds and characterizes the changing temperature and molecular distribution of the environment within microseconds.

Previous techniques have required multiple lasers to characterize the extreme environment. This technique is novel in that it uses one laser, an advancement made possible by using an acousto-optically modulated quantum cascade laser.

The acousto-optic modulator allows for measurements so fast that the one laser can do the work of multiple lasers in a fraction of the time.

The researchers developed and tested their technique using a shock tube that uses small amounts of fuel to produce micro-explosions.

Loparo, who helped lead the research, says much planning went into developing the technique before it was tested in the shock tube.

“I’m really pleased with the results,” Loparo says. “We did a lot of modeling beforehand to predict what we should see, and it matched pretty well with what those models said. The results were very good.”

The laser used in the research was designed by Arkadiy Lyakh, a co-author of the study who is an assistant professor in UCF’s College of Optics and Photonics and is also part of UCF’s NanoScience Technology Center.

This research was partly funded by the Air Force Research Laboratory Eglin and the National Science Foundation. Vasu received his doctorate in mechanical engineering from Stanford University and joined UCF’s Department of Mechanical and Aerospace Engineering, part of the College of Engineering and Computer Science, in 2012. He is a member of UCF’s Energy Conversion and Propulsion Cluster.