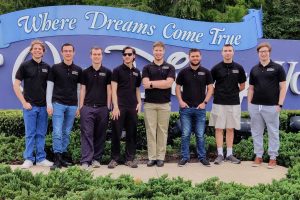 UCF has appeared at the finals in seven of the last eight years and has placed either first or second in all but one.

“I couldn’t be prouder of this year’s team,” says Tom Nedorost ’02MS, who serves as the team’s coach and faculty advisor the student cybersecurity club, Hack@UCF. “This is an amazing achievement and a testament to the long hours of practice the students put into preparing for this competition. Considering that UCF does not yet offer a cybersecurity degree, the team’s top finish is even more impressive.”

Ten teams from across the United States advance to nationals where a simulated cyber attack is staged against a fictional business network. The teams are scored on their ability to detect and respond to outside threats, keep services such as mail servers and web servers operational, and respond to routine business requests.

Organized by the Center for Infrastructure Assurance and Security (CIAS) at the University of Texas San Antonio, the competition is usually held in April. However, due to COVID-19, this year’s event was postponed to allow the organizers time to reengineer the competition as a virtual event with student teams all competing remotely from the their homes.

Team captain and digital forensics graduate student Michael Roberts ’19, who has competed for four years, says this year’s remote format presented unique challenges, namely connectivity issues that he says do not occur in the on-site competition. He says maintaining focus despite the ongoing pandemic was also difficult.

“I am overwhelmed by the amount of effort this year’s team has put into the competition,” says Roberts, who earned a bachelor’s degree in information technology in 2019. “I believe that we performed very well despite the circumstances. I applaud the work of CIAS and their team in hosting the competition virtually. I also look forward to the competition returning to a traditional format.”

The Road to Nationals

Nedorost says the team practiced for the competition remotely since spring break after UCF shifted to remote instruction for the remainder of the semester. Students were stationed in Michigan, South Carolina and scattered across Florida.

The team also won the Department of Energy’s CyberForce National Competition in 2018, and finished runner-up the following year.

“Being a part of this team has been a great honor,” Roberts says. “Many of us have looked forward to participating at the national competition since high school. Being able to work with and then lead an amazing group of students has been something I look forward to every spring.”

Each student on the team has an internship or full-time job offer lined up for the summer. Nedorost says many of the team members are continuing their studies at UCF in the fall and are eligible to compete in next year’s competition.

“I’m very proud of our team’s record and consistency in performance from year to year, and we don’t intend for that to stop next year,” he says.