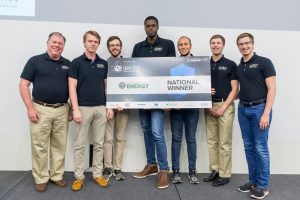 The University of Central Florida’s Collegiate Cyber Defense Team won the U.S. Department of Energy’s CyberForce National Competition that challenges teams across the country to build a robust corporate network that can withstand attacks to steal data, deface websites or wipe out critical systems.

The competition drew bids from 97 schools seeking to participate and UCF was one of 66 teams selected to compete Saturday at DOE’s national laboratories. UCF’s team competed in Argonne, Illinois. Participating teams spent several weeks designing and building corporate networks that, during the competition, were challenged by professional hackers. UCF’s networks, which included industrial control systems for a fictitious oil transportation company, a power delivery company, and a high-performance computing cluster, were found to be the least susceptible to the attacks.

“The energy infrastructure we depend upon as a Nation is under the constant threat of cyberattacks,” said U.S. Secretary of Energy Rick Perry in a news release. “As the Sector-Specific Agency for cybersecurity in the energy sector, guarding against those threats is my highest priority, and this competition is becoming a key element in developing our next generation of cyber warriors.”

The DOE tweeted a congratulatory message: “We don’t crown college football champions, but we can declare @UCF champions of #DOECyberForce!”

UCF rose to national prominence in cyber defense when its homegrown Cyber Defense Club won three back-to-back championships in the National Collegiate Cyber Defense Competition in 2014, 2015 and 2016. The competition is sponsored in part by Raytheon and the National Security Agency. The student club, with more than 350 members, continues to dominate in collegiate competitions throughout the country.

In 2016, UCF was named as a National Center of Academic Excellence in Cyber Defense Education by the National Security Agency and the U.S. Department of Homeland Security. The designation, which brings prestige and additional access to scholarships and research grants to UCF, comes under a federal program that’s meant to reduce the vulnerability of the nation’s infrastructure by strengthening higher education and research in cyber defense.