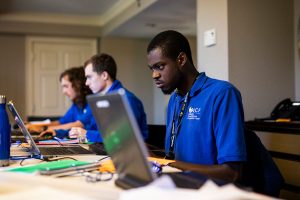 “Our team worked extremely well together,” says Tom Nedorost, the team’s coach and an associate instructor of computer science. “They were all very communicative, remained calm and did an absolutely fantastic job.”

During the three-day competition in Orlando, UCF’s team spent 16 hours operating and managing the network of a fictitious agricultural company called Cryovine that specializes in seed storage, plant development and farm-to-table initiatives. The team used their cyber skills to monitor network activity and fend off attacks from professional hackers injected into the competition to steal the personal information of company employees, acquire customer credit card information, and disrupt business activities.

The teams are scored on their ability to detect and respond to outside threats, keep services such as mail servers and web servers operational, and respond to routine business requests. The competition is organized by the Center for Infrastructure Assurance and Security at the University of Texas San Antonio.

“The professional penetration experts who participated in the competition made a point to tell me how tough our team was,” says Nedorost. “I know they were on top of their game for the last two days.”

This is the second consecutive year UCF has placed second in the prestigious competition.

The University of Virginia, who were also the 2018 champions, took first place. Rochester Institute of Technology came in third.

The field originally began with more than 200 university teams who squared off through regional competitions across the country. UCF won the 2019 Southeast Collegiate Cyber Defense Competition at Kennesaw State University earlier this month, ousting 32 teams from seven states. The victory earned the team a spot to compete against nine other winning regional teams in this week’s national event.

UCF has won the regional competition six times in the last seven years. In December, the team took first place in the U.S. Department of Energy’s CyberForce National Competition.

This was the first time competing at the national level for sophomore computer science major Alex Cote, who said the team performed well under the pressure. “We rely on each other. We need to trust each other to get our respective jobs done,” Cote says.

The team won’t rest on their laurels for long. Five team members head out this weekend for New York where they’ll again fight hackers at a student-run competition at the University of Buffalo. In the meantime, Cote and other team members will be in Atlanta for cyber training.

“We practice a lot so we end up spending a lot of time together,” says Cote. “It’s almost like a family.”

With 12 of the 14 team members returning to UCF next year, Nedorost envisions more success ahead. “We’re in very good shape to continue our trajectory,” he says. “We’re already looking forward to competing next year.”