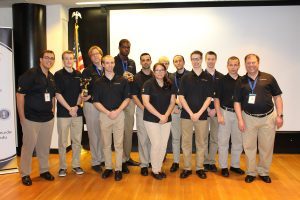 In the Argonne competition, 15 schools competed for bragging rights outside of Chicago on April 1. The UCF team was tasked with designing computer networks for simulated water and power plants. The members had to defend critical infrastructure systems against cyberattacks and keep information secure while keeping all systems operational. Experts in cybersecurity from Argonne National Labs and the Illinois National Guard portrayed hackers, trying to gain information and disrupt the systems.

“Throughout the entire competition, UCF’s water and power kept flowing with no interruptions,”said faculty advisor Thomas Nedorost. “They did a great job.” UCF’s participants had the opportunity to speak to recruiters from the national labs at Argonne, Sandia, Pacific Northwest, Lawrence Berkeley, and Lawrence Livermore during the competition.

As participants in the Illinois competition returned to UCF, other members departed for the Southeast Collegiate Cyber Defense Competition. In this competition, each team inherited identical versions of a poorly configured small business network.  Each team rushed to patch and secure the network while maintaining full business functionality.

During the competition, the teams received calls from customers and completed various business tasks like upgrading e-mail servers or website databases while under constant cyber attacks by a group of professional penetration hackers who attempted to breach security, steal data, and cause the teams’ networks to fail.

The UCF team won two of only three specialty awards presented at the competition including “Best in Defense” for building and maintaining the strongest defense against cyber attacks and the “Best in Service” award for maintaining the highest systems and services availability over the two day competition.

Support the UCF Cyber Defense Competition Team. Click here to see a flyer about the team.