UCF 3rd in Nation, 21st in World, in ‘World Cup’ of Computer Programming 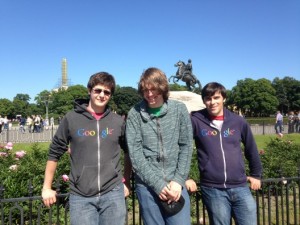 The University of Central Florida placed third in the nation and 21st in the world in the “World Cup” of computer programming competitions.

UCF placed after New York University and the University of Texas at Brownsville in the World Finals of the Association of Computing Machinery’s International Collegiate Programming Contest (ACM-ICPC), also known as the “Battle of the Brains” in Ekaterinburg, Russia.

UCF was among 122 teams that competed in the contest after advancing from a pool of 8,000 regional teams from around the globe.

The contest begins with each three-member team receiving up to 12 problems that involve math, logic, graphs, charts, geometry and other categories. Each team shares one computer to solve the most problems in the five-hour contest, writing a computer program for each solution. This year’s questions included real-world scenarios pertaining to efficient delivery of baggage onto and off airplanes on different routes, balancing cranes used at a construction site and finding the ideal location to place surveillance equipment with several constraints, and reconfiguring a sensor network.

UCF made it to the World Finals after taking first place in the Southeast regional contest against teams from Florida, Georgia, Alabama, South Carolina and Mississippi. For 33 consecutive years, the UCF Programming Team – UCF’s most winning team – has placed in the top three in the Southeast, a record unmatched by any other regional programming team.

This is the 25th time UCF has competed in the World Finals since establishing the team in 1982 – one of the most successful records in the nation.

The team devotes 35 to 40 Saturdays a year to practicing for the championship. The seven-hour practice sessions simulate the five-hour contest, with the extra time spent on analysis and feedback.

See all the World Finals results at ICPCNews. Learn more about the UCF Programming Team here.