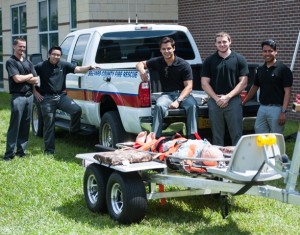 From a three-in-one ocean rescue trailer, to a detection-and-alert system for parents who travel with infants in their car backseats, to a drone laser tag game, UCF engineering students showcased 100 of their inventions and new technologies Friday during the Spring 2015 Senior Design Showcase.

Some prototypes offer potential solutions to real-world problems. Others offer a bit more fun and have the potential for commercial development. It’s just what leaders in the College of Engineering and Computer Science want to see of their graduating seniors.

The goal of the showcase is to give students a chance to display their final projects, demonstrate their technical knowledge and show they are fully prepared for engineering jobs. On a more practical level, the projects represent a significant portion of students’ grades and in many cases is the final step before graduation.

For example, a team lead by Brevard County’s Ocean Rescue Chief Jeff Scabarozi developed a three-in-one trailer that cuts the time between rescuing a drowning swimmer and getting the victim medical care on shore.

It’s exactly what Scabarozi – who oversees lifeguard operations from Cape Canaveral to Melbourne Beach – wanted to create when he decided to go back to school to get a second degree in mechanical engineering.

The trailer that his team created can carry a personal watercraft on roads and also on sand. The trailer then can be used as a gurney to transport a patient over sand to an ambulance.

“I’ve had this idea for a while,” Scabarozi said. “It’s something we desperately needed. When I had the opportunity to pursue my engineering degree it was a perfect fit. And I had a lot of support from Brevard County to do it. ”

The project solves the problem of having one personal-watercraft trailer for the road, another trailer with balloon tires for sand, and then a separate stretcher for the patient. This senior design project combines all three, and allows for the continuation of CPR from the beach to the ambulance.

The trailer is already used on Brevard’s beaches, Scabarozi said. It was brought to UCF to show others how it works.

Two teams – one an industrial engineering team and another a mechanical engineering team – developed different systems that would alert weary or forgetful parents that they’ve left their infant or toddler strapped into their car seat after the parent has walked away from the vehicle.

One team developed an app that sends the parent an alert message and buzz on a smart phone if they get beyond a certain distance from the vehicle. A sensor inside the vehicle, which detects life and temperature readings, triggers the phone alert. If the parent ignores or doesn’t hear the alert, the vehicle’s alarm and/or horn starts to blare, drawing attention to the vehicle.

“Though it sounds cliché, the feeling of knowing that this project could save lives creates an emotional attachment and accomplishment that is not easily described with words,” said team leader Eli Lorenzo, who will graduate May 7.

Another team took a different approach to reach the same goal – saving children or pets left behind in hot locked vehicles.

Phillip Quintero’s team developed a system that has the ability to scan an area as big as a standard sedan’s backseat in order to detect if both life and a harmful environment exist. If both conditions are confirmed, a custom alarm will be signaled that can be heard up to 500 feet. The system scans for temperature, humidity, carbon monoxide and carbon dioxide, and more.

The life-detection system uses ultrasonic sensors for motion, and infrared sensors for body temperature, Quintero said. If a toxic environment is detected, a custom alarm will sound. The two team members who graduate this summer hope to potentially add two features – either automatically having vehicle windows come down once the alarm is activated or activating the air conditioning. The other two team members who graduate next month already have jobs lined up.

Not all the inventions attempted to solve life-and-death problems. One team came up with a game called Drone Hunt. The team adapted a drone to respond to laser tag shots while flying within a limited air space. Players use laser tag weapons to fire at the drone for a specific amount of time. When the time expires, the drone returns to its takeoff position. The computer aboard the drone logs data about the activity, including the accuracy of shots.

“We thought it would be fun for potential consumers,” said Emmanuel Martinez, who led the team of graduating electrical and computer engineering seniors. “We also recognize that with some refinement there could potentially be some military-training applications here.”

This story was adapted from a story originally published on UCF Today.