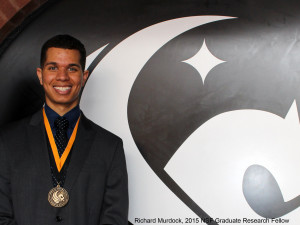 Eight UCF students were notified today that they earned graduate research fellowships from the National Science Foundation. And of the eight, five are students in the UCF College of Engineering and Computer Science.

The fellowships are highly competitive and recognize outstanding graduate students and their demonstrated potential “for significant achievements in science and engineering.” More than 16,000 students nationwide applied for the fellowships. Only 2,000 students were selected.

Winners get three years of financial support within a five-year fellowship period in the amount of $34,000 each year. The universities where students are completing their studies also get $12,000 to cover the cost of tuition and other fees. It is expected the students will earn a research-based master’s or doctoral degree in science or engineering. Fellows also have opportunities for international research collaborations through the Graduate Research Opportunities Worldwide initiative and professional career development with federal internships provided through the Graduate Research Internship Program.

Most of UCF’s recipients are The Burnett Honors College students or graduates. Below are profiles of the five CECS students. To read about all eight students, click here.

Imad Hanhan will graduate in May with a degree in mechanical engineering and is pursuing graduate studies in aeronautics and astronautics at Purdue University. While at UCF he conducted research in aerospace structures and materials, investigating advanced techniques in damage detection. Hanhan conducted research at the Canadian Light Source and Purdue. He is part of the Raghavan Research Group led by UCF associate professor Seetha Raghavan. Hanhan’s graduate studies will focus on micromechanics of high-performing aerospace materials. The Florida resident aspires to become a college professor.

Zachary Loparo is a mechanical engineering student working in assistant professor Subith Vasu’s lab. His work focuses on developing a mid-infrared LED-based sensor to make simultaneous measurements of multiple gaseous species in different environments. Loparo has already conducted research at the National Transportation Center at the Oak Ridge National Lab in Tennessee where he worked on a sensor to detect carbon monoxide and carbon dioxide in engine exhaust. Laparo is part of UCF’s ICubed project, which the NSF funds. ICubed (Innovation through Institutional Integration) is a partnership between the College of Engineering and Computer Science, College of Arts and Humanities, College of Education, and the College of Sciences. The goal is to ensure broader impact of NSF-funded projects through coordination and integration of the education and research activities of these funded projects.

Richard Murdock (pictured for this story) is a mechanical engineering major in the College of Engineering and Computer Science with minors in bioengineering and mathematics. He conducted research at UCF for an Honors in the Major thesis and was selected as a 2013 summer intern at The Johns Hopkins School of Medicine and was a 2014 Amgen Scholar at the University of California, Berkeley, where he studied nano-biotechnology and biosensor development. As an Astronaut Scholarship recipient for two consecutive years, he represents UCF nationally by meeting with astronauts and speaking to influential STEM education patrons. He volunteers with Junior Achievement, Honors Educational Reach Out Help the Homeless program with IDignity, Achieve a College Education Day, and stays involved in his church. As a member of The Burnett Honors College, he held numerous leadership roles. Most recently, he worked with a team of senior engineering students developing a centrifuge to be used on the International Space Station to conduct scientific studies on interplanetary dust collisions. He is pursing a Ph.D. in biomedical engineering and is currently weighing his options for the future. He has been admitted to programs at Johns Hopkins, MIT/Harvard and UC Berkeley/UCSF.

Angela Rodriguez is pursuing a doctoral degree in environmental engineering at UCF with a focus on water quality. Her graduate program research project will likely focus on drinking-water quality and treatment, and working with coastal water purveyors in Hawaii and Florida to enhance their treatment methods to protect the consuming public from suspected carcinogenic compounds. She plans to research ways to safely reuse residuals generated by seawater desalination. Rodriguez also has served as a Girls EXCELing in Math and Science mentor. GEMS is a program aimed at helping to increase the success of women in STEM majors. Among her career goals is landing a job with a consulting design-engineering firm designing water and wastewater infrastructure.

Alvaro Velasquez is pursuing a doctoral degree in computer science at UCF. He works in Sumit Kumar Jha’s lab and is the second person in Jha’s lab to earn the fellowship in five years.  His research focus is in the area of verification of computer architectures, computer-aided design, high-performance computing and emerging computing paradigms. He earn a fellowship last year to spend the summer conducting research at the Air Force Research Laboratory and has earned several awards for his research. He would like to eventually become a college professor.

This story is adapted from a story originally published on UCF Today by Zenaida Kotala.