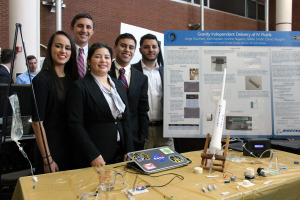 Engineering students at UCF are at it again, this time trying to give NASA and scientists fighting cancer the tools to help them in their quests.

As part of their final projects before graduation, one team of engineering students has designed a way to administer IVs in space, where there is no gravity. Being able to provide fluids and medicine via an IV will be important when astronauts begin long-range space missions to Mars and beyond.

Another team created a lung simulator that contracts and expands just like the real thing. The simulator could help scientists figure out a better way to eradicate tumors on lungs. By studying how the lung moves, scientists may be able to figure out a more accurate way to deliver radiation therapy with lasers that destroy cancerous cells while preserving healthy ones.

UCF’s engineering students tackle real-world problems in a variety of arenas, from designing safer bridges and software programs that recognize missing children in a crowd to enhancing food-production delivery services and designing innovative medical instruments. Their work is shared with the community at Senior Design, a showcase from 8 a.m. to 2 p.m. in the Engineering II atrium today and again before spring commencement ceremonies.

The projects help students master their area of expertise, expose them to how the real-world works, and have real-world applications.

“Each of us worked on a specific part of the project,” said Jorge Guzman, who worked on developing the IV for space. The Nicaragua native is scheduled to graduate with a degree in aerospace engineering in December. “I’ve been poked and prodded all my life because I have a heart condition that’s required multiple surgeries. So it was very important for me to make sure this design was safe for a patient, both in terms of sterility and potential complications like air bubbles,” he said.

The challenge for pushing fluids in space is that there is no gravity to help draw the fluid. There is also an increased risk of air bubbles getting into the line. Air bubbles introduced through an intravenous line could cause an embolism and death. So the team devised a machine the size of an old fashioned metal lunchbox that has a pump to draw the liquid and a filter that detects and removes air bubbles.

“It took a lot of hours on the software development side to get the right accuracy in the pump,” said Josh Kaplan. “And I still want to tweak it some — make it pretty. But it works.”

The team spent about $500 to develop the device and used several off-the-shelf components in a unique way to get the job done.

“The system will provide professionals insight into more efficient ways to apply radiation and save healthy cells,” Eljaiek said.

The current way to attack lung cancer is to treat the tumors with chemotherapy and/or radiation treatment. But with the team’s invention, scientists may be able to be more precise in delivering the radiation.

“The thing we learned is that things don’t always go the way you have planned,” Eljaiek said. “You have to adjust and the key to making it all work despite the unexpected is communication and collaboration among your team members.”

Aside from the technical skills, these soft skills are among the qualities that employers say they most want to see in recent graduates.

Eljaiek, like many of UCF’s soon-to-graduate engineers, have jobs already lined up at such places as Mitsubishi, Lockheed Martin and Northrop Grumman.

Celebrating the Summer 2020 Graduates of the College of Engineering and Computer Science
The Invisible Line of Cyberdefense
Computer Science Professor Inducted into the National Center for Simulation Hall of Fame
UCF Ranked Among Top 5 in Nation for Transportation Science and Technology
UCF Researcher Earns 2nd Department of Defense Grant to Detect Opioids, Toxins