Reach for the Stars Award Recipients Changing the World 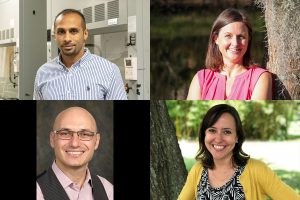 The 2020 UCF Reach for the Stars recipients have conducted research that may change the world we know. From supersonic engines that may someday let us travel from New York to Los Angeles in 30 minutes to protecting our waterways, exploring the new world of attoscience and making education accessible to those with disabilities, they are all champions.

The Reach for the Stars award recognizes early career professionals with highly successful research and creative activity with a national or international impact. Together this year’s four honorees have about $ 10 million in sponsored research funding from a variety of organizations including NASA, the US Department of Energy, the National Science Foundation and the Florida Department of Transportation.

Kareem Ahmed leads novel research methods in propulsion and energy production, including a focus on developing high-speed reaction techniques that could allow for hypersonic flight. Hypersonic flight is air travel at more than Mach 5, or 4 thousand miles per hour, meaning a person could travel from New York to L.A. in less than 30 minutes.

“I’ve always been fascinated by speed and propulsion engines, and in particular, converting energy to useful work,” Ahmed says.

Ahmed’s research group is the first in the nation to explore using a Mach 5 to 7 detonation for hypersonic propulsion. They are also studying the use of a rotating detonation rocket engine, a method that creates rotating reacting shockwaves inside an engine and is on the cutting edge of propulsion and power research.

Ahmed is the principal investigator of more than $6.5 million in research funding and has published more than 130 scholarly articles, including studies in the journals Science, Combustion and Flame Journal, Proceedings of the Combustion Institute, Fuel, and the American Institute of Aeronautics and Astronautics journal, AIAA.

“The ultimate goal for our research is to understand and control explosive high-speed turbulent compressible reactions in engines, which will result in significant energy release and cleaner reactions with substantial reduction in emissions for the same fuel used,” Ahmed says. “It will lead to developing higher thrust propulsion engines for hypersonic and supersonic flights, space rocket propulsion engines for space travel that are more powerful yet efficient compared to engines used to date, and ultra-high energy engines for electric power generation.”

Kelly Kibler grew up around the water ways of North Carolina, so it is no surprise she has dedicated her career to helping protecting the aquatic ecosystems of the world.

She looks for ways to manage water resources critical for irrigation, navigation and hydropower, while protecting the aquatic ecosystem that people rely on for many important services, such as clean water. It’s a delicate balance, which is being threatened by human development and climate change.

For the past 15 years she been studying the fine balance in Florida’s estuaries as well as waterways around the world. She is well respected in the field. Before joining UCF in 2015, she worked for the United Nations at the International Centre for Water Hazard and Risk Management in Tokyo, Japan.

Kibler has published more than 11 peer-reviewed journal articles where she as the lead author and another 12 as a co-author. She has also presented at various venues including association meetings and the World Bank, National Academy of Sciences and UNESCO. She has more than $1.6 million in grant funding and believes in inspiring the next generation of researchers. That’s why she has worked with more than 30 students since 2015 including several doctoral candidates. Collaboration is in Kibler’s DNA, which is one of the reasons she also a member of the UCF Center for Integrated Coastal Research and mentors so many students.

She also believes in people’s ability to come up with solutions, think outside the box and the need to educate the community about the importance of Florida’s waterways.

For example, as part of an educational outreach component of an NSF grant in 2017 she helped create a module called Oyster Yoga. This was a movement and estuary education model develop for 4- and 5-year-olds.

Luca Argenti is an expert in a new and emerging field of attosecond science that studies the fast motion of electrons in atoms and molecules at their natural time scale, with one attosecond being equal to one billionth of a billionth of a second.

The field was only recently made possible in the 21st century thanks to breakthroughs in scientific technology, and much of the research conducted in Europe.

“For more than a decade, Europe has maintained firm leadership of attosecond science in general. One of the few remarkable exceptions is physics and optics professor Zenghu Chang’s laboratory at UCF,” Argenti says. “It is in this context that, in 2016, I decided to take the opportunity of a joint opening at the Physics Department and CREOL to cross the pond and join UCF.”

Since then, Argenti has secured more than $1.5 million in research funds, and has been published in leading journals including Science, Nature Communications, and Physical Review Letters. He has received the highly competitive Department of Energy CAREER award as well as awards from the National Science Foundation.

Some of his most significant research contributions include the development of methods that allow the observation of new phenomena in the areas of high-resolution molecular photoelectron spectroscopy and attosecond electronic wave-packet dynamics in metastable atoms.

His goal is to ensure that UCF is the leader in attosecond science on this side of the Atlantic Ocean.

“Research projects within the attosecond community are at an exciting juncture, as each involve on average a dozen experimental and theoretical collaborators across nations,” Argenti says. “In these conditions, everyone can make a relevant contribution and has the chance to be part of a really international enterprise.

“If my research program is successful, it will be possible to predict beforehand the result of the interaction of an atom or molecule with a complex light pulse. As a result, we will be able to design sequences of ultrashort pulses that give us full control over charge-transfer processes in matter, such as those used by nature to harvest solar light and convert it to chemical energy.”

Jacquelyn “Jackie” Chini perceives the challenges experienced by those living with disabilities when it comes to academic excellence, and she can’t stay silent about it. Her work within STEM discipline-based education research (DBER) addresses the gaps within her field regarding the education of diverse populations.

“I realized early in my teaching career that I did not have the skills and mindset needed to support the full variation in my students’ abilities, needs and interests,” she says. “I would like to see physics instructors become knowledgeable about methods to make their content accessible to all learners.”

The bulk of her research revolves around using simulation experiences as mechanisms for educators to practice implementing active learning strategies. Chini investigates the use of these mixed-reality classroom simulations in bringing graduate teaching assistants (GTAs) face to face with diverse students. Her hope is that these simulations address the challenges GTAs encounter when seeking to support diverse student populations.

On a global scale, her research articles have been featured in Physical Review Physics Education Research and she has organized national workshops and conferences including the Cottrell Scholars Collaborative National Teaching Assistant Workshop which took place in Atlanta last year.

Chini has earned about $2.26 million in sponsored funding to continue researching this diverse community and how best to usher them into the Physics Department through their educators. As a junior faculty with UCF since 2011, her work has time and time again reflected her ability to generate positive change both within the university and beyond.