Pretty Soon, Floridians May No Longer Need to Wait to Turn Left on Red 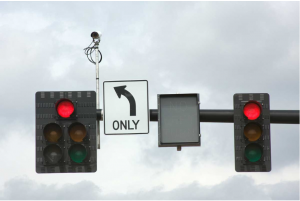 Waiting for a left-turn signal to change at an intersection can seem like an eternity, especially when there is no oncoming traffic.

However, a University of Central Florida researcher is working to speed up that process while also making intersections safer by using real-time traffic-condition data to create responsive left turn signals.

The work is part of a recently completed Florida Department of Transportation-funded project that began in 2012. Some of the latest findings were published by FDOT this month.

“It’s a common frustration, and FDOT was getting complaints,” says Hatem Abou-Senna ’03MS ’12PhD, an assistant professor in UCF’s Department of Civil, Environmental and Construction Engineering, who led the research. “If you’re sitting in the left-turn lane, and you see there’s no traffic, why is it red? Why can’t a left turn be permitted?”

Safety is also a major concern with left turns, both for cars and pedestrians, Abou-Senna says.

Left-turn crashes are some of the most common types of crashes, after rear-end crashes, with some studies showing they represent almost 20 percent of all car accidents. Unsafe left turns can also be deadly to pedestrians attempting to cross the street at intersections.

In the recently published report, the researchers showed the effectiveness of a decision-support system for improving left-turn signals that’s based on real-time traffic data and can be linked into existing signal controls.

The system can override a turn-prohibiting red turn arrow on a signal head and switch it to a permissive, flashing yellow arrow when the system detects a long period in which there is no oncoming traffic and no pedestrians have hit a crosswalk push button. It does this by using a camera or a loop detector at an intersection to determine the amount of time between vehicles arriving at an intersection and computing how much time is needed for a vehicle making a left turn to cross each lane safely.

Loop detectors are wire sensors embedded into the ground at intersections that use electrical currents to sense the presence of a vehicle passing over or stopping within the loop.

If the system determines there is no oncoming traffic, and there is enough time to make a safe left turn, then the signal head will permit it.

This is an improvement over many current systems that are set in a predetermined mode. For instance, at an intersection with high traffic volume during rush-hour times, traffic engineers may determine the left turn should be set for only one of two alternating modes — a green arrow protected left turn mode and a red arrow mode — and not incorporate a flashing yellow arrow permissive mode.

This can result in drivers stuck with a red left turn arrow when there is no oncoming traffic, a problem that tends to occur especially when it’s not rush hour.

Abou-Senna’s dynamic system, however, is responsive to whatever the real-time traffic conditions are.

“The research product is a device that operates in real-time mode to make intersection safety decisions based on current traffic patterns,” Abou-Senna says.

“It reduces the burden on the driver and helps the driver make better decisions especially during the permissive phase,” he says. “So, when the yellow arrow is flashing, it’s based on available gaps in the oncoming traffic, and the driver can make the left turn. The idea is the potential elimination of all left-turn-related crashes with efficient operations.”

The researcher and his team established the safe crossing times for the system’s computations through their studies of vehicles turning and moving through intersections.

In the report, the researchers detail how they tested the effectiveness of the system through virtual scenarios in the UCF Intelligent Transportation System Lab and for three hours each at six field studies at intersections in the Orlando area. In the field studies, all vehicles were able to make safe left turns as permitted by the flashing yellow arrow.

Protocols were followed to ensure traffic safety during the testing, including implementing a safe mode the system would default to, which was simply indicating a red arrow if there ever were any inconsistencies in the data.

FDOT is currently reviewing the system for potential application in Florida. The research team received nearly $1 million since 2012 to work on the project.

Abou-Senna received his doctorate in civil engineering from UCF. He joined UCF as an assistant professor in 2014.