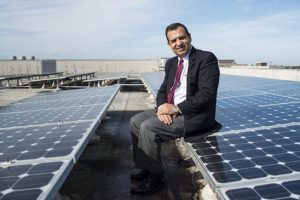 UCF Professor of Electrical and Computer Engineering Issa Batarseh is a research scholar, inventor, and entrepreneur in the field of solar energy. In short, he’s a visionary. So when he says we’re tipping on the edge of something big, we all should pay attention.

At a glance, you would never guess what is happening in the lab where Batarseh works with electrical engineering students. Inside the lab’s four walls are hard drives, cables, and equipment you don’t dare touch. But that’s a nearsighted view of what’s going on here. Batarseh has been at the forefront of energy conversion and innovations for nearly 30 years.

The next time you’re in a UCF parking lot, look up. See those small solar PV panels on the light poles? Batarseh and his team invented the low-cost high-efficient micro-inverters that made those possible. They’re merely a hint of the revolutionary smart energy systems he envisions worldwide — and we’re closer than you think.

Robert Stephens: Start with your credentials — 29 patents and too many titles and accolades to list in this space. Which ones mean the most to you?

Issa Batarseh: Emotionally, it would be the recognition from the King of Jordan last fall for my work in the field of electrical engineering. My parents were there for the ceremony at the Dead Sea in Jordan, so that was special. The most influential recognition would be from the Florida Inventors Hall of Fame in 2017 — it means a lot to make significant contributions in my home state with such an important application like solar energy conversion.

RS: In simple terms, what exactly are you doing?

IB: Trying to improve lives around the world, long into the future. Just like we once had an industrial generation, I see this as an energy generation. So I work with a team of talented students and colleagues to make solar energy more efficient, accessible and affordable.

RS: How close are we to seeing widespread application of solar energy?

IB: The tipping point is no longer 20 or 50 years ahead. It’s right now. We are living the smart solar energy revolution.

RS: What are you working on that could tip everything forward?

IB: The integration of solar harvesting and electric battery storage is the key. If we can harvest solar energy and store it for later use, and process it better, then, in the long run, we wouldn’t even need a grid. Energy would be delivered the way Uber delivers — whenever and wherever you need it.

RS: Is that really possible?

IB: Think about it. We’ll have 1 trillion sensors in the world by 2020. If we can integrate that kind of intelligence with energy storage and solar distribution, everyone in the world would have stable and available clean energy 24/7. It wouldn’t be bulky or expensive or complex.

IB: Nikola Tesla was the inventor who is very much responsible for today’s electric power grid. But he also had the vision for the smartphone, back in 1926. He wrote about humans communicating with anyone on the globe, with a device you could fit in your pocket.

RS: Why do so many innovations never see the light of day?

IB: Several reasons: Technology readiness, market demand, and the fact that companies can be too protective. Universities can be self-driven, too. I came to the realization nearly 20 years ago that I could not do this work on solar-energy conversion alone, that I needed experts from various fields, even from the private sector.

RS: Tell us about your own team.

IB: I’ve been very lucky when it comes to attracting top students worldwide. I have graduated 35 Ph.D.’s, 44 masters and 15 honors in the major undergraduate students. We recruit people who have not only the intelligence but who are able to address real-life applications and communicate them with others.

RS: When did you first envision this idea of solar conversion?

IB: I was working in Chicago in 1985 when Zenith asked for a way to improve the power electronics in their TVs. They wanted to make the energy conversion components smaller. I thought, “If it’s so important for televisions, why not push for better energy conversion for other applications?”

RS: What was your first big step?

IB: When I was hired at UCF in 1991, I asked about building a lab to study power electronics for energy conversion. There wasn’t much budget back then, and there were a lot of questions, but eventually we built the lab through federal funding. By the time renewable energy and clean environment became major topics a decade later, we were ahead of the research.

RS: And you’re still ahead of the research.

IB: That’s where we always want to be. We’ve had at least five students start their own companies in the field. We’re competing with top universities in the U.S., Europe, and China, right here at UCF. Country after country is moving completely to solar energy, and they’re using technology that we helped develop.

RS: Looking even further ahead, what’s your ultimate goal?

IB: We’re doing all of this to make a difference in people’s lives, and to help improve the world in a small but important way.