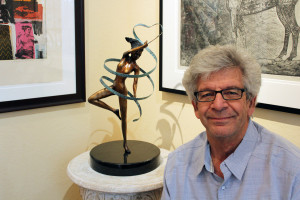 Robert Hoekstra has lived in two worlds for many years — engineering and the arts. Now, he’s officially bringing them together in unprecedented fashion at UCF.

Hoekstra, an associate professor in UCF’s Department of Industrial Engineering and Management Systems, was recently named an associate professor of art and is co-teaching this spring with art professor Robert Reedy to bring both fields together in the class Advanced Design Lab. Hoekstra is the first at UCF to share a joint appointment between the art and engineering colleges.

The class has 44 students, with about a third of them engineering students.

“What we’re trying to do is have engineering come together with art,” said Hoekstra, who has a bachelor’s in English, a master’s in design and a doctorate in engineering.

“Engineering has marched so far down the road, and art has too, that’s it’s not possible to have one person be both. The solution is not to develop a new industrial design program. The solution is to respect what artists bring to the party. And we can do that by literally getting them into a room and having them work together.”

For centuries, engineers and artists were mostly the same people, but as technology emerged the disciplines began to separate.

But that’s changing at UCF.

“To the best of my knowledge, this isn’t being done anywhere else,” Hoekstra said. “It’s never been done within a traditional university structure.”

In Advanced Design Lab, all is being done in the names of creativity and innovation. Reedy cites the need to “adapt, improvise and overcome” and warns the students to expect the unexpected from the client.

Hoekstra preaches creative exploration. “Creativity is at the very core of engineering,” he said. “I want students to explore 100 ideas before they arrive at one solution.”

In the class, students are being asked to work on projects in partnership with an Orlando theme park that will challenge them to create solutions for real-world scenarios.

“Art students who go into industry need to know how to work with engineers,” Hoekstra said. “They might need to know how to speak some of the language; they have to have some basic engineering and physics concepts. That’s the communications link. The artist can have the discussion with the engineer. And that’s what we’re trying to teach here.”

UCF’s new Maker Space Labs in the Engineering II building and the Advanced Design Lab in the School of Visual Arts and Design illustrate the new approach. Each area is designed to foster collaboration across academic lines. “While many universities are looking at this, UCF is the first to make it happen in this way,” he said about the labs.

Reedy said it is his goal to establish a place where these kinds of experiences can continue. “It’s critical that artists understand the importance of science and math and what engineers do, and even business. And the reverse is true for engineers and businesspeople,” he said.

Michael Shears, a senior in mechanical engineering, said he is looking forward to working with the art students.

“Their different backgrounds may give an alternative view on a problem,” he said. “They often ask questions on whether or not something technical can be done. And so far, many of the ideas in my group have come from one of the artists asking the engineers if a process was possible, and after discussion we found new ways that it may be accomplished that we hadn’t entertained previously.”

For Hoekstra, who came to UCF as an assistant professor in 1993, the move is a natural. Aside from his multiple degrees in art and engineering, and before he became an academician, he conducted advanced research at IBM in artificial intelligence, designed cars for Penske Racing, and ran an award-winning media production company that won an Emmy.

His quest at UCF is to foster the kind of synergy and exploration that ultimately lead to breakthrough creativity: “It’s getting engineers and artists to work together…It brings the artists out of their studio into industry.”