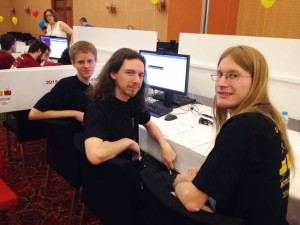 The University of Central Florida’s Computer Programming Team has retained its rank in the nation’s top 10 after competing in an international super-contest known as the “Battle of the Brains.”

UCF placed 8th among U.S. teams and 28th in the world in the Association of Computing Machinery’s International Collegiate Programming Contest. Last year’s UCF team placed 3rd in the U.S. and 21st in the world.

Only 128 teams competed this year, representing the best of more than 10,000 regional teams from 101 countries and 2,534 universities. The 2015 world title went to St. Petersburg National Research University of IT, Mechanics and Optics. Another team from Russia – Moscow State University – placed second. The highest ranking U.S. team, from the University of California Berkeley, placed sixth.

They advanced to the world contest by winning the Southeast Regional Contest in the fall, beating 108 teams from Alabama, Florida, Georgia, Mississippi and South Carolina.

That regional victory marked the 33rd consecutive year that the UCF Programming Team has achieved a top-three regional win, a long-standing record unmatched by any similar team in the nation.

The contest begins with each team receiving problems that draw on competitors’ skills in math, logic, graphs, charts, geometry and more. Each three-member team shares one computer to solve the most problems in the five hours allotted, writing a computer program for each solution. For example, a problem might ask competitors to route a fire truck across a city in the quickest time, using a complex set of conditions, such as one-way streets and road closures. A penalty point system is used to resolve ties.

The secret to UCF’s success is devoted practice, 35 to 40 Saturdays a year. UCF’s seven-hour practice sessions simulate the five-hour contest, with the extra time spent on analysis and feedback.

“Not only are the students committed to practicing, but we owe so much of our team success to our coaching staff who devote countless hours to the team effort,” said Ali Orooji, a professor and advisor in the UCF Department of Electrical Engineering and Computer Science, and the team’s faculty advisor.

The seven volunteer coaches are UCF faculty, former team members and industry professionals who prepare the teams with intense practice and instruction in algorithms, programming and teamwork strategy.

Click here to learn more about the UCF Programming Team.