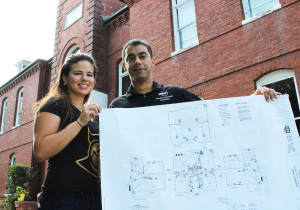 UCF mechanical engineering senior Kevin Bauer wants people to know that the national award-winning student club he leads – the American Society of Heating, Refrigeration and Air Conditioning Engineers – is devoted to reducing global energy consumption, and not to repairing appliances.

The student engineers design and build heating, ventilation and air-conditioning systems for buildings and for seven of the past nine years, UCF’s designs have placed in the top three in ASHRAE national contests.

Last week ASHRAE announced UCF’s second-place rank in its “Design Calculations” category for an environmentally friendly, cost-effective system for a building in Doha, Qatar. In 2014, UCF earned a first-place title in the same category for a system designed for a New York City building.

Pictured above: Jenna Beatty, ’15, and Mohamad Zabihi, ’15, UCF mechanical engineering alumni, designed a proposed HVAC system for the 1902 building that houses the Sanford Public History Museum during their senior year as members of ASHRAE at UCF. Beatty now works at Harris and Zabihi works at OCI Associates.

The systems they design incorporate the latest technology as buildings become “smart.” Smart buildings use information technology, sensors and more to gather and share data (such as humidity readings and occupancy levels) to optimize building performance.

Innovative methods to cool a building – such as the Qatar building’s system that freezes water in a storage tank overnight when energy costs are lower – are often incorporated into new building designs. “I got involved in ASHRAE to be at the forefront of an energy-sustainable world, optimizing one building at a time,” Bauer said (pictured left). “I’d like to see more of my fellow engineering students get involved in UCF’s new building projects.”

He plans to get students involved by collaborating with UCF’s Office of Sustainability Initiatives and reaching out to campus groups like IDEAS for Us, a UCF-born national nonprofit devoted to implementing green and sustainable solutions.

“How the HVAC system is designed plays a major role in determining a building’s environmental impact,” said David Norvell, UCF assistant vice president for sustainability initiatives and a mechanical engineering alumnus. “This is where students can get involved on campus – they can help design UCF’s new buildings at the pre-construction stage, be involved during construction, benefit their alma mater and leave a legacy.”

At UCF, all new buildings must be LEED-certified (Leadership in Energy and Environmental Design, a rating by the U.S. Green Building Council) and the HVAC system design is critical in earning the certification. LEED certification is based on a point system that covers a range of categories for the building.

The consistent success at the national level has made UCF’s engineers with HVAC design coursework in demand with employers.

“It seems like every engineering firm I talk to is hiring and asking me about UCF students in the ASHRAE chapter – which ones are graduating and which have already accepted offers,” said Kyle Inge, a 2012 graduate in mechanical engineering. He is an engineer at Peninsula Engineering in Orlando who says that UCF’s success comes from the university’s relationship with local companies and a highly concentrated curriculum.

Those close industry ties transform “book theory into real-life application,” said Inge, who came to UCF interested in aeronautics and realized he enjoyed HVAC design after an internship at Walt Disney World.

Swami teaches HVAC I and II Systems Engineering courses, and incorporates electrical, aerospace and mechanical engineering disciplines. Only students who are most interested in HVAC take the courses, he said, which allows for an especially deep dive into the subject matter.

“Not many universities have such courses,” he said. Thermodynamics and heat transfer courses serve as complements. No special HVAC certification is required beyond a bachelor’s degree in mechanical engineering.

Mike A. Culver, a recuiter for exp U.S. Services in Maitland, said he actively recruits UCF engineers. “When I see ASHRAE on an applicant’s resume, it tells me that they are top-notch candidates. Being active in ASHRAE is a key indicator of an individual’s passion and dedication to their future profession.”

The company has more than 3,000 employees worldwide and hires several UCF graduates each year for its Maitland office. About 20 are UCF alumni, including Christian Robledo, past ASHRAE chapter president who graduated in May and was hired in June as a mechanical engineer. Robledo is the student liaison for ASHRAE’s central Florida professional chapter.

Visit the ASHRAE at UCF website to learn more.